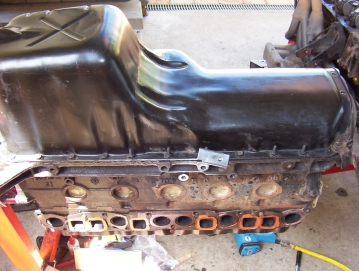 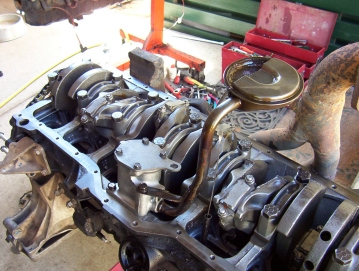 This sump was caked in oil soaked mud which all had to be cleaned off just to find the bolts and studs for the sump. Once the sump was off, the new supplied high volume oil pump, that is included with the Titan stroker, was installed. The old pickup was wiggled out of the old one and transferred into it after the strainer was cleaned. A full gasket set is also included but it did use the older 4 piece sump gasket. Was a bit fiddly to install so would recommend the one piece one as shown on my site on replacing the rear main. Remember to place some black sealant in each corner where the different parts meet. At the back the cork goes under the rubber U over the bearing cap but is the opposite way at the front. 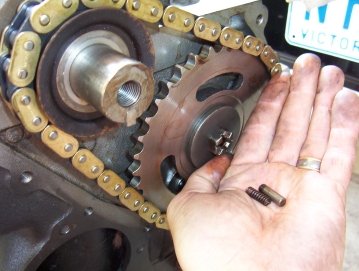 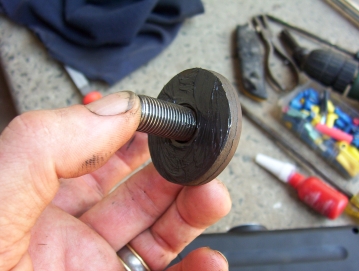 Easily forgotten is the spring and pin that sits in the middle of the cam sprocket bolt. This must be fished out and transferred to the new one. It rests against the back of timing cover once installed. Also when installing the harmonic balancer, place black some sealant on the key as well as the back of the washer as oil can work it way out otherwise. 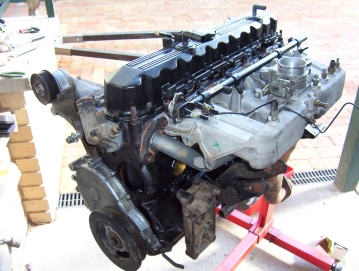 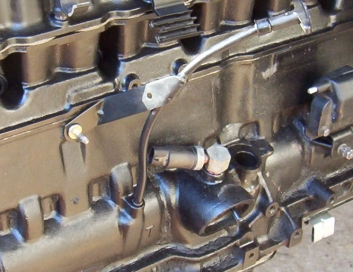 The headers and intake was so much easier to fit out on a engine stand. Use the gold sealant like shown in my header replacement write up. Also was the cork gasket ( fit dry for best results and don't over tighten the bolts ) needed for the alloy rocker cover, pressed steel ones only need the black sealant. The gasket locating parts were on the cover so could not hold it in place once turned upside down. So I just flipped the whole engine and installed it that way to save gluing the gasket to the cover. You notice here also that the dip stick tube is held in place by a removable stud which also takes a earth wire once installed. Also install the oil pressure sender as shown with it twisted closer to the block. Many get damage when removing the oil filter it left like stock. 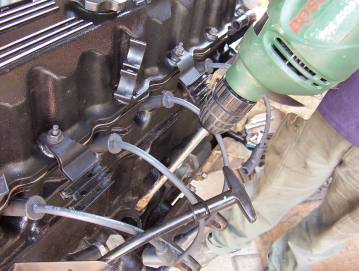 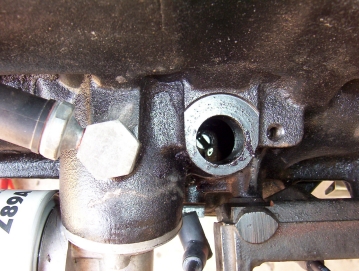 Fill the sump with oil. Titan recommends Rotella or Delco 30W oil for break in. If neither of these are available use a oil high in sulpha like a diesel oil.  Also a very good idea to prime the oil pump and get pressure up before installing the distributor. Run for two minutes using a half inch drill and a old large screw driver with the handle cut off. Pays to grind three sides to the part going inside the chuck to prevent slippage and causing metal fibres from dropping into the engine. Leave the oil pump slot at between 10 and 11 o'clock ready for the distributor installation.