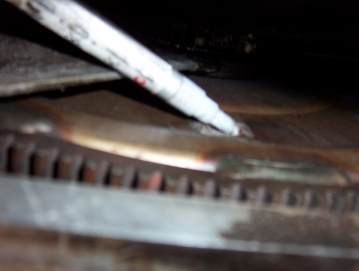 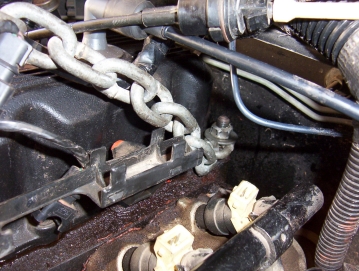 Support the engine before removing the rest of the bellhousing bolts. I used the rear most engine stud after taking out the coolant gauge sender. The other end was the idler pulley bolt as found it balanced perfectly this way. Also remove the CPS as very easily damaged if knocked while removing or installing the engine. The flex plate to torque converter bolts need to be taken out after the inspection cover is removed. Make sure you mark one hole and the plate so you know the orientation when putting it back. They must go back in the same position as are balanced. Also remove the bolt holding the auto dip stick and go over the whole engine checking for any wires or lines etc. 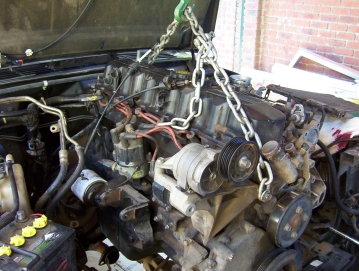 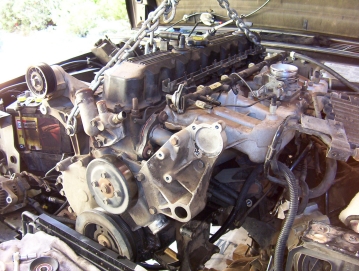 Take up a little weight before trying to remove the main one bolt that goes through each engine mount. If you can get it just right, they should be easily driven out. No need to remove the rest of the mount. You can see in this picture also the A/C condenser laying out of the way still connected on the guard. Keeping checking over the whole engine as you lift a little higher to make sure no wires etc are left connected. You will need to come forward pretty quickly to clear the firewall with this engine which you do as soon as it clears the engine mounts. You can see how it has been brought forward to the auto cooler. 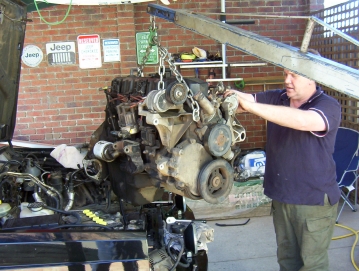 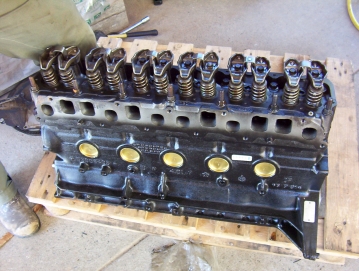 So here it is free from the Jeep. The Jeep owner Mark was on hand to give a helping hand while rolling the engine crane out of the way. So now the next step was to get the old engine onto a engine stand and transfer over the idle pulley mount so that the stroker could be lifted up into place on the other stand. Must say thanks to Peter at FMA again for lending me the stands and the crane for the job. 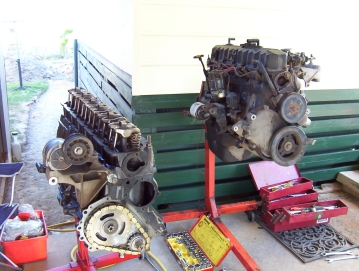 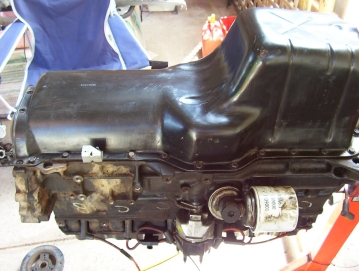 What is great about having left the most things attached as possible, is that as you take each component off you can transfer them with the right bolts onto the new block without looking for them! It also pays to take a picture of both side of the sump before removing it so you know where each has a bolt and where the studs go that hold other things in place once back in. I found it take way longer to clean everything than it takes to remove the refit them. Was longer than pulling the engine or refitting it as well.