Fitting a behind bumper auto cooler.

I have long wanted to fit a larger than stock cooler for the automatic transmission. The problem is that fitting it in front of the radiator restricts the airflow through the A/C condenser as well as the radiator. Not only that, it also heats up the air going to both of these and many report higher engine running temperatures and even the A/C not as cold after fitting one. So what I have done is fit one below the radiator with air drawn through it by the Ford Taurus fan I fitted at the same time. But it might also be possible to fit a separate small fan for the cooler itself if you didn't want to upgrade to the best electric fan on the market. Summit Racing also sell coolers with fans already mounted to them.

I looked for the biggest cooler I could find to fit in there. I used this 20,000 GVW one which I bought from Summit Racing but those with LHD's will have to measure up what they can fit instead. You might be able to fit the same one if you remove the stock auto cooler as otherwise the pipes from it would get in the way. The one I used was 7 1/2"x20" which is as deep you can go and still be covered by the front bash plate. Remember also that is will actually sit behind the cross member so you can go a faction deeper and not worry about the kick up it has at the end. I also choose a cooler that had cooper tube as much more efficient in heat transfer than aluminium. This model also has what they call 'turbulator' tubes which spin the fluid making sure all the fluid is cooled and not just the fluid on the outside touching the walls. 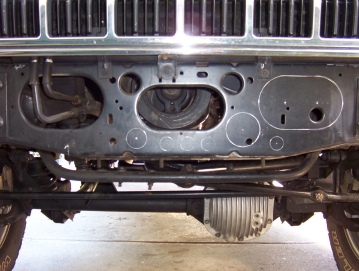 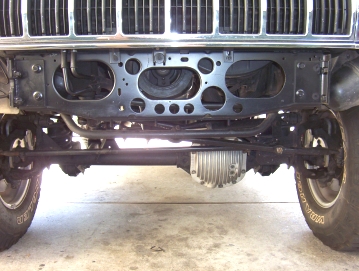 On my RHD I don't have as many openings on the side I had to fit my cooler on to be in front of the Taurus fan. On LHD's, you will have to fit it to the other side where the large hole is already. So what I did is duplicate the large hole over to the other side and then added some smaller holes to increase the air flow. The cross member does not need much strength if you have fitted a stronger bumper as I have. Some even remove this completely if recessing the winch as far back as possible. 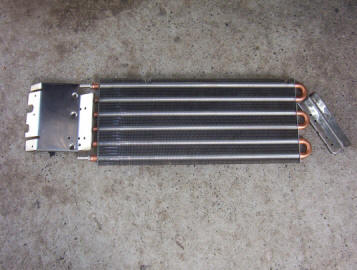 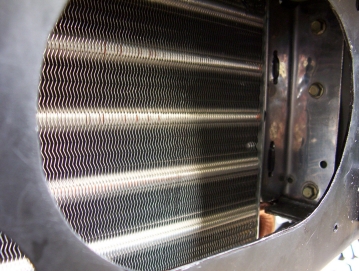 For mounting brackets, I actually made them completely from one stock stainless steel XJ rear license plate holder. The frame side was just folded into a angle and screwed into the side of the frame. The back touching the actual tubes I stuck on some soft rubber strip. A hole was then drilled above and below a couple of tubes and a zip tie feed through and around the tube to hold it in place. The cooler was placed so that is was at exactly the same angle and flush with the back of the radiator above it. This allowed the fan shroud to rest against it leaving no air gap. 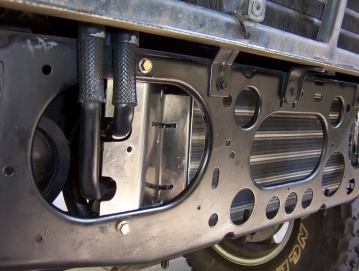 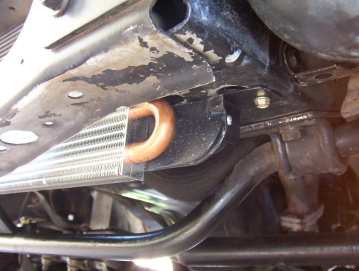 With the other side I angled in the bracket as much as possible to flow more air across the cooler. I have left the stock cooler in place and now has power steering fluid running through it via 3/8" hose diverted from my filter in the return line which you can see here. The holes for the zip ties where drilled left and right of the tube elbows and has the same rubber strip added so there is no metal on metal contact. You can also see in the next picture the small section I had to block off in the corner to prevent air being sucked freely though there without passing through the cooler. 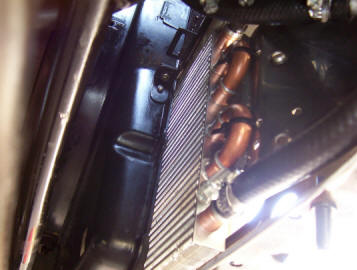 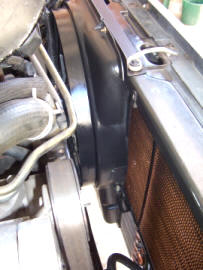 You can see in the above photos how the shroud of the Taurus fan come down to cover most of the cooler. I could have just fitted a cooler the width of the shroud but went for the biggest I could fit in there as the extra will still help cool even without the fan assistance. To plumb it I simply took off the top hose from the stock cooler and put it into the top port of the new cooler and same for the bottom. The top even reached without extending the stock hose but the bottom needed only about 6" added to curve down nicely. You will need to buy a joiner for the bottom one or maybe the male and female adaptors supplied can be used as they screw into each other. I have by passed the stock radiator cooler altogether this way as big enough to do this. Also removes the risk of an older radiator cooler leaking and the coolant entering the transmission! If you live some where where it regularly gets down to freezing or less, run it through the stock cooler as well to warm it up as too cold is not good for the auto either. 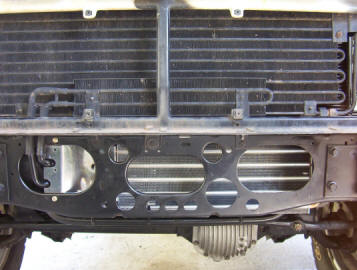 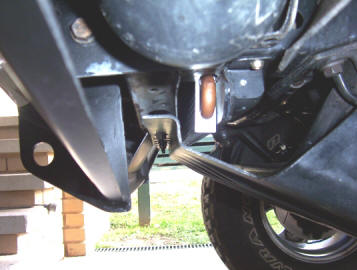 Looks really good tucked in there out of the way of the main radiator. Only the bottom right hand corner is exposed when the cross member kicks up there but that is well protected by not only the bumper, but the stock skid plate as well. 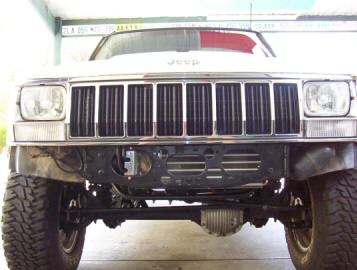 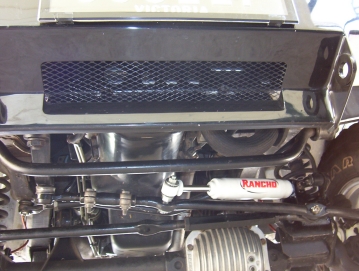 When I made my bumper, I had already fitted in a vent for the power steering cooler I had mounted there. This has now been removed as using the old auto cooler instead. This vent will help get air in when the fan is not drawing air through but is not critical as heavy work for the auto would mean the same for the engine so the fan comes on at this time anyway. XJ's without the tow package in the US don't even have the extra cooler and use the in tank radiator one only showing that it is fine even if you had no air flowing over it. Just being inline without airflow would still add significantly to cooling as well. But just like the coolers mounted on the underside of truck beds, there is plenty of air to be drawn through from under the bumper without extra venting. Having a winch bumper without the winch would give good flow as well or even holes drilled in the front of the bumper as often seen on Safari Race Trucks if the extra flow is wanted.