The white background files are available for only $10 USD. via

by just clicking on the PayPal icon in the row that has the file you would like from the table.  Some of the files have pictures below with the number next to them shown in the description of the file. Those in Australia can pay directly into my account if you prefer after emailing me to get the details. You may like to email me first to see if I am currently at home to be able to email the file to you as I can be away for up to 7 weeks touring in the Outback or another part of the world.

Above are my gauges in metric measures.

The imperial gauges to 95 MPH.

The gauges to 85 MPH and black needles.

Above is a MPH version that goes out to 105 mph and 8 on the tacho but normally it is out to 9 to match the Speedo sweep.

Above is a mph to kph conversion and a look at what it looks like with the white needles left unpainted. Thanks go to Jall of Spain for the photo. There is also a version that will allow you to convert your kph to mph or mph to kph as below. Please state which version when ordering from the table.

Yes above there is neon behind the gauges on Jeff Barello's XJ who provided the photo. It is called Hott Wirez by a company called Street Glow who makes it. It is flexible neon tubing that is very thin so it was used to just outlined the gauges with it and it looks great. People have seen it for sale at Target for $19.99 USD. The photo below that is from Jesse's XJ which shows the way the neon wire was run. 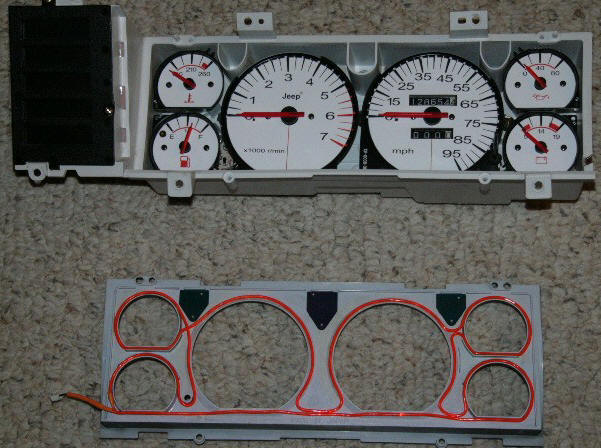 And here it is done in red on John Axe's XJ.

My Canadian Kph-Mph version which Michael has sanded smooth the surround before priming and painting it with a Dupli-Color Chrome paint from Walmart. Looks very effective I think. I tried it but was not as successful so bought a stainless steel surround instead.

These white backgrounds not only makes it easier to read but looks in keeping with the Sport model as well. At the request of a New York policeman that tested the first background for me it was found that the stock gauge was not accurate in the higher speeds so I have made some changes to make them as close as possible to the radar checks he gave me which he was very happy about!

You can make the background colour anything you choose by simple using coloured gloss paper to print it on unless you laminate them and then standard paper should be used. You can also use photo paper with an adhesive backing that will be the same as a sticker but making it a little harder getting it over the needles and lining it up. Also all these are shown have 40 mph at the top of the Speedo but if you have 45 mph as some do like the photo below, make sure you tell me as I have just put together a file for them. They also come in a variety of different configurations including a large fuel gauge on some so tell me what you have.

45 mph at the top and a large fuel gauge above.

The above one with the 45 mph at the top also comes with a different tacho that starts at the same place as the Speedo. The Speedo on the above was printed at a different time and done in in black only unlike the file which has the Kph in red and the circle around the gauge has also been removed. Tell me if you require one of these ones. I also have one for the basic gauge set that I just finished but no photo as yet. You can also swap yours for a full set very easily and only requires the senders to be changed and the tacho is already wired to go! Jason has a write up on it here. Also it is impossible to do later than the '97 model as the lighting shines through the face and so it can't be done.

Above is the basic set that Aaron has fitted to his. This is the file BasicsetA.pdf.

Picture of 95&8Mph.pdf given by Michael Cole.

Daniel from France has provided this shot of a KphDiesel84-91.pdf file.

Photo of the 95Mph.pdf provided by Tyler Correll with the bezel done in carbon fiber.

Here is a photo from Joseph Massa on one of my files with a flame background that can be added to any of them. He has also added the red neon rope to very good effect with the flames.

KphtoMphDiesel.pdf photo provided by Aidan Woods from Ireland to convert a 91+ diesel from Mph to Kph.

120MphKph.pdf with optional flames and punisher skull background. Photo provided by Kevin Hardy from the UK.

BasicsetA84-91.pdf with skull and flames. Photo provided by Paul McCarthy from Florida, USA

Just specify the flaming background when ordering your file of choice if wanted. Other logos, like above, can be added.

I even have a white back ground to suit a Honda 750RC04 that I made for good friend Jerome in France who also did the French write up for me. The file name for this one is Honda750RC04.pdf. See Jerome's write up on his site here on installing them.

Most popular files in table below:

Conversions: MPH to KPH and KPH to MPH

( just click on the PayPal icon in the row of the file you want to pay  ) If you do not have PayPal you can create an account with them and they will debit your bank, credit card or checking account for free, ( over 10 million already have ) on their secure site. I use to work on an honesty system where I would send the file first and wait for the cash to be sent to me, but less than 1/3 of the people ever bothered to pay! I will process it as soon as possible unless I am on holiday but any payments made will have the files sent the first day after I get back. If you are worried about it then you can email me before sending the money.

I spent a lot of time getting this as accurate as possible by calculating all the angles and making up my own matching font to get the same dimensions as stock. Each of the different size stripes were made then placed on angled guide lines and the symbols also had to made so I could get as close as possible to the original. The different versions in 85, 95, 105 mph all have stock spacing but the last two just go further around the dial.

All things on this web site are copyrighted and can not be reproduced in anyway without my permission. The file I will send to you cannot be given or sold to anyone else.

I have saved them as PDF files so you will need the free Acrobat reader to view them.