With conversion to rear discs brakes the proportioning valve is often modified to increase the fluid the rear under hard braking. With my conversion, which is similar to the ZJ rears, I used a ZJ p/valve instead to make it the same as Jeep factory all disc setup. You can also just swap in the internals from a ZJ one too which will have the same tear down as shown below. With others that have used Chevy or Ford Explorer Calipers they have got good results from doing the following modification. The other thing to look at is the master cylinder which I didn't as I still had stock height on the pedal and that what tells you if you need to change it or not. You will have a lower pedal if the rear needs too much extra fluid and the pedal will be noticeably lower when in use if the rear calipers are bigger than what I used. There is no point using a ZJ M/C as they are the same ( part number and all ) as the XJ but if in the US I have been told that a Firebird all disc brake M/C works well. So the other thing that is often done is modifying the proportioning valve to get more fluid to the rear. Remember though that this removes the isolation between front and rear so a failure at either end would leave you without enough pressure to the other! For that reason I DONT RECOMEND THIS MODIFICATION! It is only included to show what is done by some but you do so at your own risk! 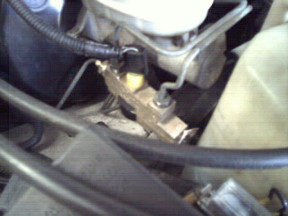 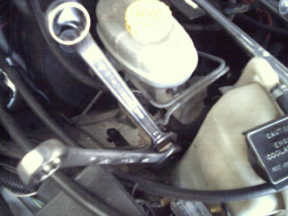 The proportioning valve only limits fluid to the rear under hard braking and under normal braking does nothing giving a 50/50 split so changing that will only effect hard braking performance. You can pull the rubber cup as shown if you have used large rear caliper piston size and many have found this useful when running Explorer or Ford 9" disc brakes but I found it caused lock up when I tried it. You will find it under the M/C and it's best to hold the valve with a 3/4" spanner while un-doing the bleed screw at the front ( has a rubber cap on it ) using a 13/16" spanner. Be careful when un- doing the last bit as it is under spring pressure and will shoot out if you don't keep your thumb on it. 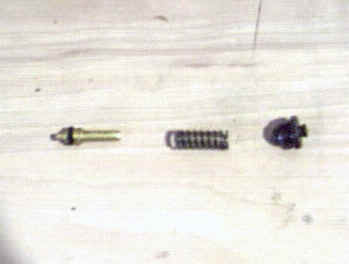 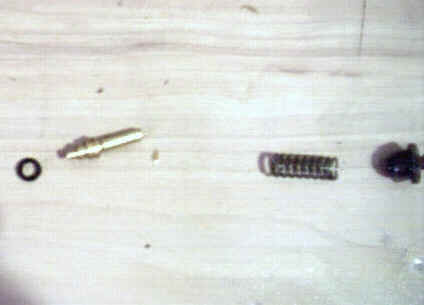 What you will pull out is the bleed nipple, spring and piston with the cup on it. Just pull off the cup and re-assemble which can be tricky as you have to compress the spring while starting the nipple. I found the easiest way was to push against the nipple with a small socket and wrench while turning the nipple with the spanner. I you have someone with you then you can just bleed the valve by cracking the three lower pipes or using the bleed nipple at the front and expel the air from there rather than trying to push it out the entire system. If you find this modification causes the rears to lockup like mine did then just replace the cup making sure that the higher side of the cup faces away from the spring. If you cannot bleed through the front valve nipple then you have it the wrong way around.

Remember that it will only make a difference under hard braking and not under normal braking. You can fit an adjustable valve like this but then you will lose some fluid to the rear at all times not just under hard braking. Remember that the harder you brake the less the rear brakes can do no matter what setup you use as the weight transfers to the front. I would recommend that if you have fitted the ZJ rear discs you should also fit the ZJ proportioning valve like I have done here so you have the full factory setup like the ZJ as the master is already the same between them. If you are fitting one to a non ABS XJ you will have to transfer the extra rear break line port from the old proportioning valve.