I have been wanting to change my air filter for many years as it is a limiting factor in performance and economy once you have opened up the intake and exhaust. I looked into a drop in replacement K&N filter but they have a 1/3 less filter area but still claim more flow which means it has bigger pores which will let small dust particles can get through as laboratory tests on the web have shown. Any filter you have to oil you run a risk of too much oil will hurt performance and too little will cost your engine. How do you know when you have it perfectly right? So a bigger paper filter is the way to go and even better is one that removes heavy dust particles before the filter is even better. I also wanted an air cleaner to be completely shielded from the hot under bonnet air which drops performance and also away from bull dust which covers everything that is found on our Outback tracks. In fact I have never seen an open cone type cleaner on any 4wd that is used in the Outback for that very reason as would clog up in minutes.

The filter I have chosen is made by USA company Donaldson and is #FWA080022 or with a vacuator valve #FWA080031. It uses filter #P181054 which is shown on their site to fit 1107 different applications including Graders to Harvesters and tractors etc running big V8 turbo diesels from Cummings to Perkins. They also have released a new range of heavy duty plastic moulded filters now as well and Grace Linder from Donaldson sent me the specs here for them. I really like the ones with a built in 90 degree elbow as that would have saved more space. Might prove the deciding factor for those with LHD's. See the bottom of this write up for one that has been now fitted. 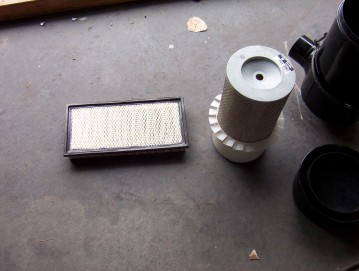 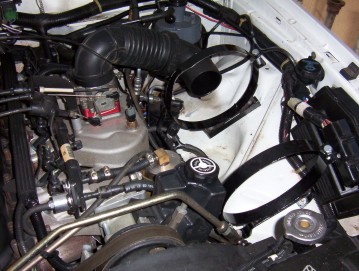 You will see in the photo above that the new filter is much bigger than the stock paper in filter area and in fact it is 3.66 times bigger. To work this out you measure the area of each fold and multiply them by the amount each has. So stock has 94 folds 15.3 x 60 cm = 8,629.2 cm2 verses 158 folds 333 x 60 = 31,568.4 cm2 of the one I have chosen. You can see also the vanes on the filter which spin the incoming air to remove heavy dust particles which is then held in a trap at the end of the canister. The area under this is still used in the filtration of the air as there is a gap between it and the filter and you can see that from old filters as well. To fit the air filter I made brackets to clear the stiffener on the inner guard as this should never be cut or folded as will weaken the whole area supporting the coil and shock mount! 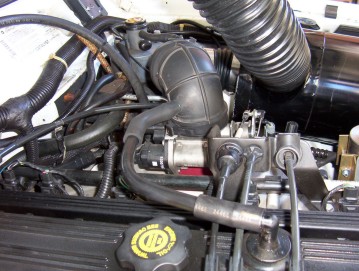 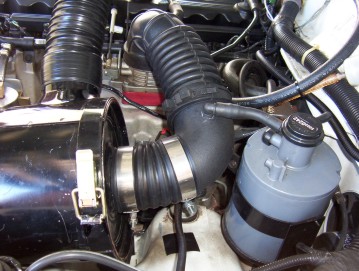 I did have to move and lower the A/C drier but could do that without disconnecting it and used the original bracket which was refolded to suit. It now sits hard against the shock mount . I have moved the PVC port to the throttle body elbow using a threaded brass fitting. The charcoal canister port was fitted to the second elbow and protrudes into it by an 1". The side facing the engine was cut away to make a venturi effect to increase the vacuum to the canister and has dropped the smell from under the bonnet when idling. Those with ABS I don't think could fit one of these and LHD's will have to check brake master clearance. The canister is 8" round and 15" long in the body. You have to add the outlet and elbow to the length. This is the biggest you will fit in and still get the bonnet closed. 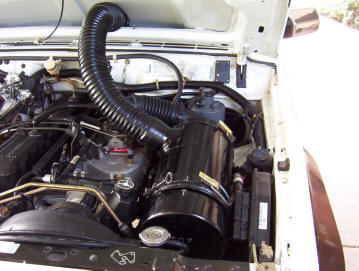 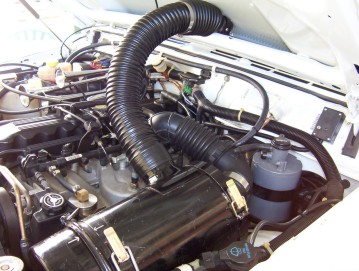 The flex hose used is externally ribbed and smooth on the inside to give good flow. It is 3" in diameter which is what is required for full flow at WOT without any restriction. The hose lays down around the throttle body elbow when the bonnet is closed. The canister is held down by over the centre clips so it can be lifted up easily to service the filter. The dust trap on the end can be removed without doing this though. I have fitted a vacuator valve which would let any water or excess dust out. 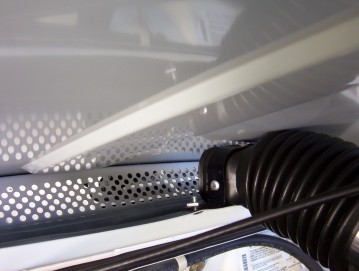 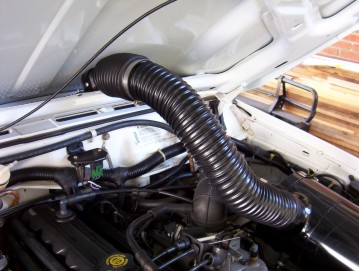 You can see above how I have am drawing the air from the front of my cowl bonnet. I used a rectangle to round transition from a non EFI XF Ford Falcon air cleaner here in Oz but you should be able to find similar any where for other large cars. I made sure the area of the rectangle was larger in area than that of the 3" hose. Those without a cowl bonnet can draw the air from the cowl area at the top of the firewall like shown here on Madxj site. The hose is set back from the cowl grille so when I block the grille off during water crossings it can still draw air from under the bonnet. The cross member also acts like a 1"x 2" drain in front of it at other times too. 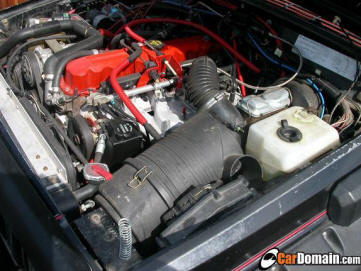 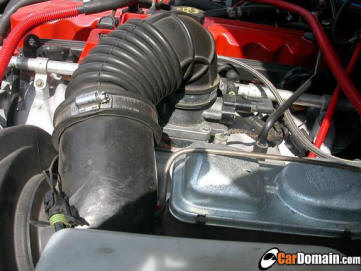 The pictures above I since have come across was shown me by Dingo509 from the NAXJA forum. This is the full 8" model with moulded in 90* elbow fitted #G082526 and including the safety filter. I think that the safety filter is over kill on anything less than a tractor etc which spends all of it's time in the dirt and it cost too much CFM in our case. Better to go with #G082528 without the safety filter which flows 275 CFM verses only 215 CFM with the safety filter. One thing you have to take into account is that his Jeep has only a single diaphragm brake booster so later models from 95 on could have some trouble with the dual booster.

Did a search and found a site with the following information on calculating the CFM for our engine.
What he says there is that maximum CFM is not reached at the red line as you would expect but at peak torque. He also states that you don't get maximum efficiency with the average motor but only 80-85%, which ours certainly isn't with only 2 valves and not the most flowing of heads. It was suggested by Dr. Dino 75% would be closer to the mark.
Using the formula given: Rpm x displacement / 3,456
Maximum torque on my 95 is at 3950 ( later models are lower ) x 242 / 3,456 = 276 CFM if it were 100% efficient. Even if you take 80% efficiency it would = 221 CFM.
But the proof is in the eating as they say. I just got back from my Easter trip towing my trailer as per usual. As most would know I have a trip computer fitted that I built and have been taking note for years on every tank full. I have just returned just under 1.5l/100 kms better which is a little less than 1.5 mpg than I have ever recorded for this type of run. I was also amazed to see dust in the trap already after only 535 km on this little trip which only had around 50 kms on the dirt! The engine also feels more responsive as well. Strange thing too is that both my wife and I noticed a drop in engine noise too for some reason. I think it is due to the much smoother air flow where everything it nice and rounded unlike the floor of the old air box which caused much turbulence.  I will update after our next big trip to let you know how it all goes.