This is about installing a high volume water pump, thermostat housing and thermostat ( they all must be up-graded at once to get the gains ) from Hesco. This stops the engine getting hot spots where the coolant boils off the cylinder walls stopping them from being cooler as the coolant is no longer touching. The extra pressure, and the fact that the coolant is not left too long against the cylinder walls, will stop it from over heating it and boiling off. Some people worry that it can be worse as the water doesn't stay in the radiator long enough. But you must remember that longer the time in the radiator, the longer the time in the engine where it can only absorb so much heat before the boiling off the cylinder walls. It is a closed loop system so the longer in one area must mean longer in an another. It is a very fine balance as extra pressure is always good but too much flow can be bad too. To this end I found a few years later when I changed to a 2 row radiator with bigger tubes, it flowed too fast. Didn't overheat but the high flow thermostat could not cope with the high flow so changed back to a standard one so it would not run too cold. The standard one is more restrictive which increases the pressure inside the block which actually makes it run cooler again but the spring type thermostat was able to control the flow better. 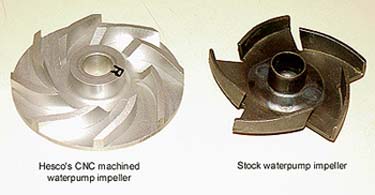 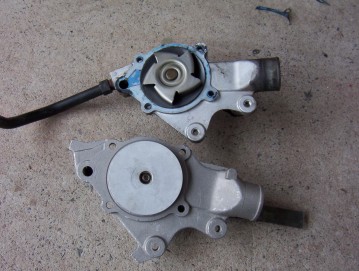 From the Hesco site: "Provides 10 to 20% more cooling efficiency than the stock water pump. We have replaced the stock stamped steel 5-vane impeller with an 8-vane billet aluminium impeller to achieve this goal. The impeller is larger than the stock and lessens the cavitations of the coolant to create a more positive flow in the space between the impeller and the #1 cylinder. The dyno showed an additional bonus of 6 hp. and 2ft/lbs. of torque gain we weren’t expecting. The horsepower gain comes from the impeller slicing through the coolant instead of paddling the coolant. Individual gains may very depending on what accessories are already in place and engine condition. Either way it is a worthy addition to any Jeep engine whether it’s a street driver or an off-road rock crawler". 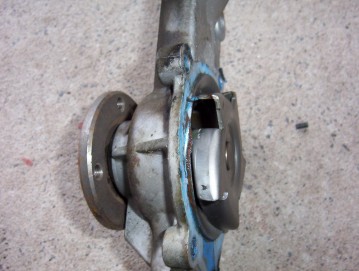 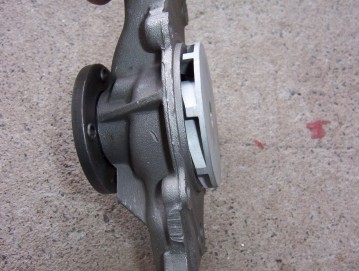 It is clear to see here the difference in the two impellers with a near new stock one on the left compared to the Hesco one ( #HF58-455 ). JP magazine even reports that Jeep copied the impeller design and used it on the 2001 up Wranglers. 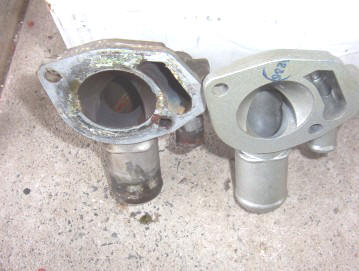 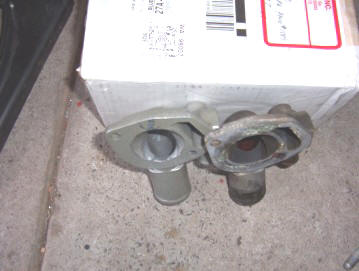 You can see above the difference between the thermostat housings ( #HFTH ). The Hesco one has been milled out so instead of a hard 90* bend, it has a 45* one to flow around instead. In the next photo you can see that I have smoothed it out even more. With a Dremel or die grinder it would be easy to modify your own.

I have tried a number of different types of thermostats over the years including the balanced styles ( either Robert Shaw or that one re-branded as Mr. Gasket as I used ) and are normally accurate to be within 2 degrees. Some standard thermostats can be off as far as 10 to 20 degrees F in regard to their stated opening and closing points. The most accurate and fastest reaction time to temperature changes has been the Stant Superstat Thermostat #45359. I had switched to a high flow 2 row radiator I had trouble even with a balanced thermostat not closing quick enough. Also the extra flow they provide reduced pressure inside the engine once it opened ( higher pressure stops water turning into vapour on the cylinder walls etc ) and flowed too quickly through the radiator. Adding a restrictor that I made, along with the Stant Superstat Thermostat #45359, it is now perfectly stable. Tests have proven that by simply opening the thermostat at the exact same temperature every single time, each and every time, the engine remains cooler on average. Engines will also warm up faster to normal operating temperature and cool down quicker once the engine exceeds that set point. This results is less cylinder wear, and consequently longer engine life.

Please use a stock 195*F temperature one so as your computer wont think it is still in the warm up cycle and stay in open loop, meaning the O2 sensor is not read and you run rich. Also, the higher the temp you can get the more efficient your engine is. Engineers are running the temperatures higher as materials and designs improve. For every 10F under 180F your engine wear rate doubles due to chemical reactions on the surface of the cylinder walls. Running a 160F thermostat QUADRUPLES your engine wear rate. For every mile you drive your engine wears like it has been driven four miles. The chemical reactions drop little abrasive oxide particles in the oil that eats up the bearings and everything else as well. 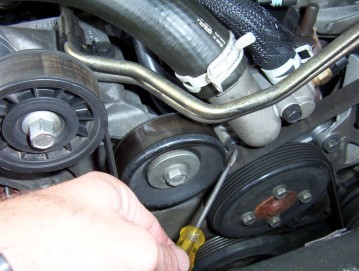 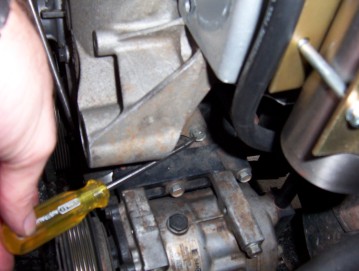 To change the pump and thermostat start by removing the electric fan which is held in only by the two upper bolts. Undo the four nuts holding on the clutch fan as well if you still have one. Take out the two bolts holding the other fan shroud in place and remove both the fan/clutch and the shroud together. You can stop it spinning by placing a screw driver between one of the other nuts and the shaft. You may have to tap in a screw driver between the hub and the pulley to work it off if stuck. Loosen the four pulley bolts on the pump while the belt is still on to make it easier. You may still have to place a screw driver across a couple of the other bolts to stop it spinning. Just loosen all the bolts without taking them right out to make sure that all the bolts can be undone this way before removing them all. Next remove the two heater hoses and upper radiator hose and then the two bolts holding on the thermostat housing. The lower one shown above which can only be got too after the belt has been removed. Starting on the water pump, the bracket supporting the power steering pump will need to be removed along with the other bolts holding the water pump on. There is one bolt for pump bracket on the side of the block as well and on RHD's is covered by the A/C compressor. This will need to be moved aside before this bolt can be taken out. The lower radiator hose will have to come off as well. 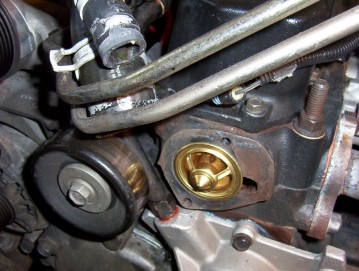 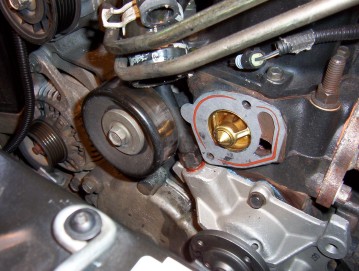 Then remove the remaining bolts holding on the water pump and clean the block free of the old gaskets in both the thermostat area and the pump. Transfer over the pipe for the heater hose using some thread sealer to the new pump. I then use Loctite Blue on both sides of the gasket, but use only a small amount, and go around each bolt hole fully before fitting it. You don't what any excess squeezing out into the block and blocking up passage ways. Refit the water pump and then the new thermostat into the block before fitting the gasket over it as shown above. Then it is only a matter of fitting everything back up again and filling with new coolant. Remember it is a good idea to flush out the radiator and block including the heater core. Remember when flushing out the heater core to only force the tap water into the heater hose that is connected to the pump and not the thermostat housing. The reason for this you what it to flow in the reverse direction to normal ( make sure the heater is switched on fully ) so any obstructions are not just forced further into a passage way it may be stuck against but out the way it came. If you are mixing your coolant from a concentrate, you should use de-mineralized water so you don't get a scale build up. It is very cheap and can be bought from a supermarket in the laundry aisle. The total capacity is around 11 litres dry so will a little under 3 litres of concentrate to make a 33% mixture or if in a very cold climate 5.5 litres for a 50% mix. Remember that a higher concentrate actually cools worse so don't run a higher mix than you need!

I have run this setup now for 12 months through two Outback trips towing my trailer and never did I have to stop to cool it down. The temperatures and far more stable than they have ever been and don't raise as high as it used to under the extreme outside temps and deep sand in the deserts that I tow through. I would do this again should I ever swap to another Cherokee. I think the combinations of all the things I have done ( 3 row radiator, 16" electric fan, cowl bonnet ) have all made a noticeable difference. Most would not need to do all I have done as would not be facing crossing over a 1000 sand dunes over 3 days in over 100*F temperatures while towing a trailer! But if it works in these conditions it will work anywhere I suspect.