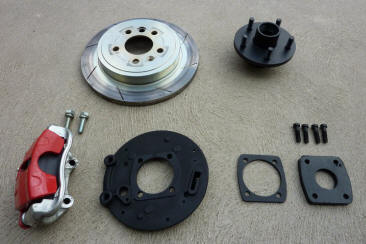 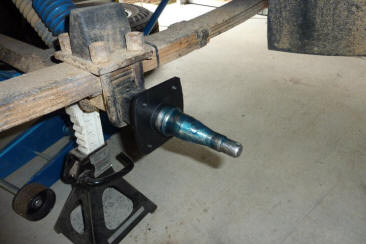 This is what I came up with for fitting Ford Falcon BA rear brakes to my offroad trailer. The backing plates/caliper mounts are from the wagon or Ute with the solid rear axle. Calipers can be from any of the Falcons of the same model. I modified the original drum mounting plates to take the disc backing plates. This saved cutting these off and preventing any risk a new plate causing any distortion to the axle when welding it on. 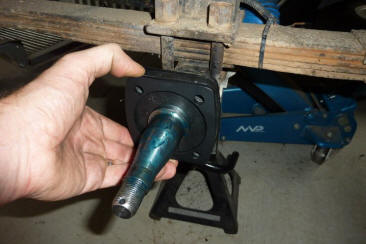 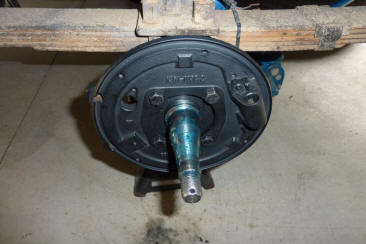 This is showing both spacers fitted, one 12 mm and the other 5 mm, which was needed to bring the backing plate to the right distance from the back of the rotor. The reason for two spacers is that the hub protruded past the backing plate so the second spacer has to have a larger hole to allow this. The backing plate bolted on. The original drum mounting plate had the holes welded up as didn't line up with the new bolt pattern. The holes were then threaded for the high tensile 3/8" UNF bolts and nylon lock nuts were also fitted behind the plate as well. This backing plate would normally also house the handbrake shoes but I will be using the hydraulic setup that came with the surge brakes. 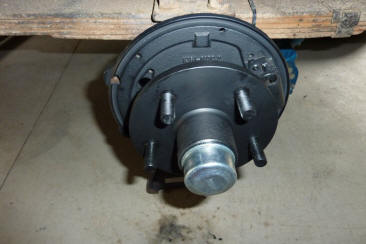 The hub fitted on. This is a Ford non brake trailer hub which runs bigger bearings than the common Holden stud pattern ones. It is also the same 5 on 4.5" stud pattern of my Jeep. The rotor is slid on and is a full 12" and once was fitted to my Cherokee where I made a conversion to rid it of the rear drums before I converted to even bigger 13" ones. 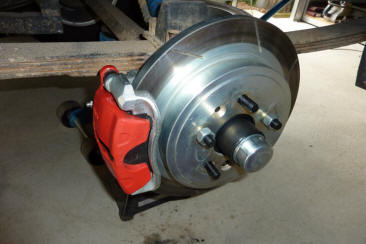 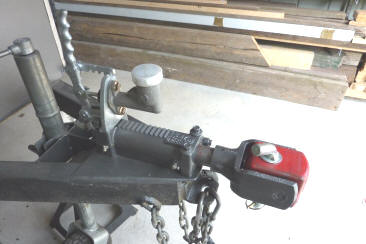 The caliper simply slides over the rotor and bolts to the backing plate. This offroad surge coupling made by Trig and sold in places like this. Rated at 2000 kg or 4400 lbs. The solid round shaft you see, between the head and the housing that is bolted down to the A frame, is what moves in and out during braking. This piston in turn pushes the lever, that is also part of the hand brake hand handle, which in turn via a pivot in between pushes forward on the master cylinder. There is an adjustment bolt at the end of the lever when it comes in contact with the surge mount so you can tune when the brakes first start to activate. 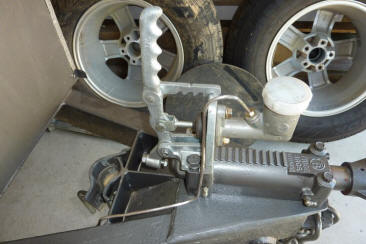 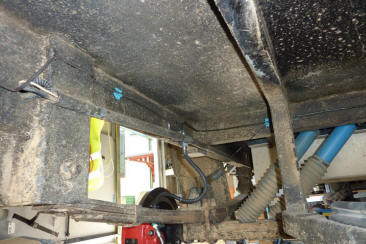 Used a Eastwood's brake line pliers to do the bends so got them nice a neat. I used the original brake line clips that held the line under the Falcon including the brake line itself. I simply straightened the line by drawing the line through two pieces of 2x1" hardwood with a hole drilled the same size as the brake line. 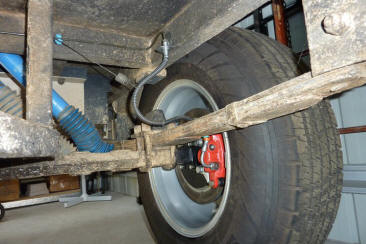 As I have a lot of suspension travel with the Jeep Cherokee rear leaves and shocks, the wagon and Ute flex lines were too short. Found that the sedan ones were more than long enough though and have the same calipers. What is great about these flex lines is they come with a mounting bracket attached and a tee piece included on one side as well to split the line to the other side. Much prefer to run the lines up on the frame rather than the axle where they are more prone to rock strike. You will also see that I have a spring to hold the flex line away from the wheel so it does not rub under full compression. 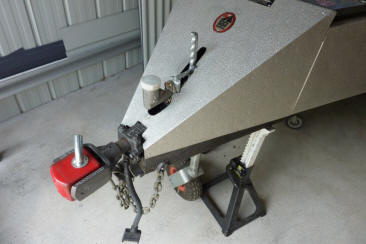 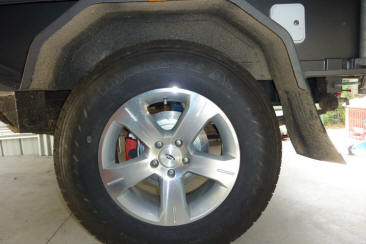 It had to modify my stone guard to clear the new setup but it will still function well stopping stones ricocheting back up to the Jeep and its rear window. I had broken two rear windows before the stone shields were fitted to the trailer. Even with a full width mud flap across the back of the Jeep and a mesh stone shield on the front of the trailer, I had broken those two windows before this solution. Never broken one since in all the years towing with this current setup. Last photo shows what the setup looks like in the matching wheels to my Jeep in 17x9" wheels and 32" tyres. The BA Falcons run 16" steel wheels as their smallest so if you are running 15" trailer wheels, use the brakes from the AU III Falcon instead. Exactly the same caliper and backing plate but runs a smaller disc and caliper cradle.