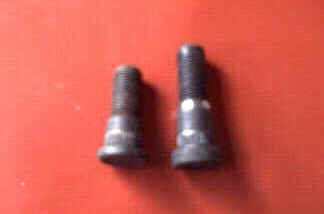 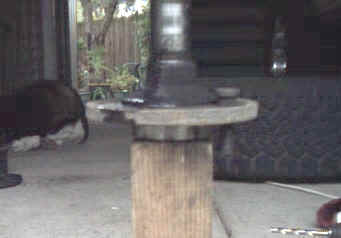 I found that the rear wheel studs where much shorter than the front when I fitted my alloy wheels last year and could not get a full nut depth in thread so had changed them for wheel studs from the front discs of a EA. The picture shows the difference in length between the stock on the left and the EA one on the right. The only thing I had to do is grind a taper to the step in the stud so it would not interfere with the wheels. I decided to grab another set while I was getting the rear discs and found a set that had already the taper on it so that's what in there now. I told that front XJ wheel studs work as well as XF Falcon front studs. As I still had the axle out I placed the axle on a piece of wood and hammered them as shown. 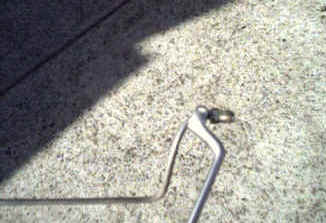 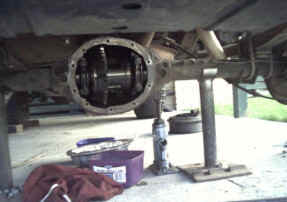 The hose to pipe connection must be supported but nothing had to be done as a bracket is already attached to the stone shield. So time to fit the brake lines and you can not use the old ones as they are too short and have the wrong flare and nipple at the hose end. I took the brake lines from the EA as well but found that the nipples would not screw into the tee block on the axle. It turns out that the Jeep is 3/8" and the EA is 10 mm metric so had to cut off that end and have the 3/8" nipple fitted. You have to straighten the pipe at that end first so you can get it into the pipe flaring tool and re-bend it back afterwards which I did as shown above using a ring spanner and moved it in small increments until I had the bend I wanted. 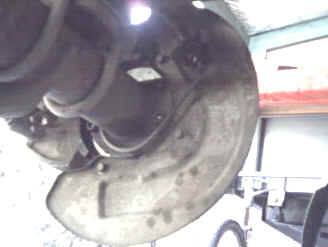 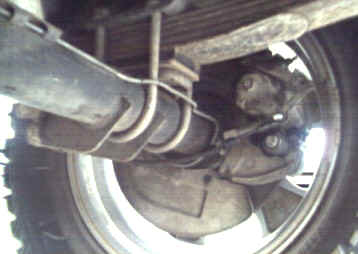 Now that I know this I would just have the whole line made up and this is what you will need: One pipe 690 mm long and the other 1310 mm. Both pipes need a 3/8" nipple with a double flare at one end for the tee piece and a 10 mm nipple with a ball flare at the other to connect to the hose. If you have gone the XF route then the pipes will fit off the XF as the caliper hoses are 3/8" and have the right fitting at the tee piece end too. If running new pipes then run them like the Ford pipes which keeps as much as possible behind the axle out of the way off rocks etc. and does not go around to the front to meet the hose until against the backing plate which will be inside the wheel as shown above. Then bleed the brakes as shown here and I used a fully synthetic Dot 4 brake fluid making sure all the old fluid was bled out of all 4 calipers as you should not mix them or top up with other type of brake fluid. 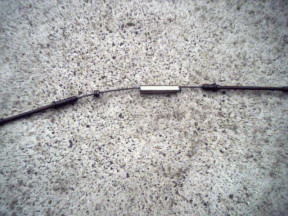 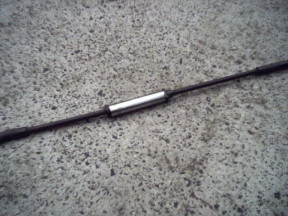 Time to do the handbrake and the Ford cable runs a hook in one end to attach to the lever. The Jeep cables were too short so I used the Ford EA passenger side cables for both sides. The problem was that the inner was way too long and the cable outer is in two sections ( one around 630 mm and the other 410 mm ). I cut the end of the cable off and slid the first outer off and then slid a tube 92 mm long that was 16 mm inside in diameter on and then side the other outer back on again with a bit of fresh grease. If you are doing it to a '97 on XJ then you can use two of the short outers for one side ( make sure you transfer over the end of the outer from a long one to the hook end as it is a different size ) and two long outers plus one short for the other. This gave me a cable a bit longer than stock but I still had to replace the end I cut off after making the cable inner the right length. 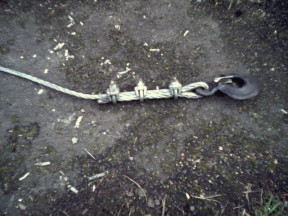 I was going to do it the same as my hand winch cable above and bought 3 mm cable clamps ( No.3, 3 each side ) and a thimble ( No.2, the part the cable bends around ) and a eye bolt ( No.1 ). I was going to open the thimble up and slide the eye bolt through before closing it up again. Pass the cable around the thimble and secure it with the cable clamps just like the winch cable shown. Then end of the eye bolt would just sit in the cable adjustment plate using a nyloc nut or double nuts. To determine then right inner length just hook the cable into the caliper and retainer and cut the inner about halfway along the adjusting bolt taking into account any extra needed for what ever end you decide to use. 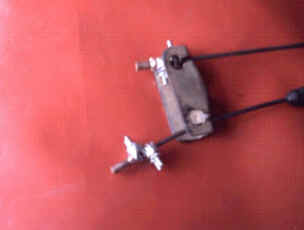 I ended up being told of a cable place that just put on a new copper end piece on using a 18 ton press for nothing so went that way. Even after two of these copper sleaves on top of one another I was worried that it might pull through the adjustment bracket so used a cable clamp like shown which gives extra strength as well. The ones I have done since I have had the place I bought my weight machine and barbells etc from. They have a much thicker piece to press on to the end of the cable so no longer a worry about it pulling through the bracket. The other end fits into the cable retainer that comes bolted to the caliper ( No.1 ) and the cable end hook fits into the handbrake lever ( No.2 ) as above. To adjust the handbrake, first hit hard on the brake pedal several times to force the piston against the disc.  Then tighten the cable under the floor until you just get about 3-5 mm a side gap between the lever and it's stop. Pull up hard on the handbrake a few times to settle it all in and re-adjust. You should only have to do this every time you change pads as they adjust every time you brake hard. I just hit the brake hard while standing still if it needs a bit of adjustment. 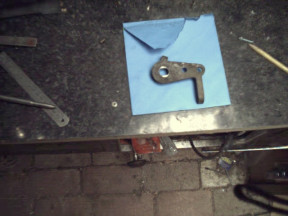 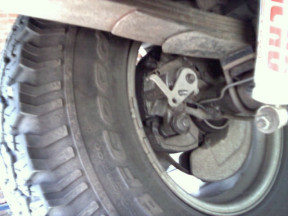 I found that even when adjusted properly that the handbrake pulled up higher that I liked. What the problem I feel is that the lever on the caliper is made for a under dash type handbrake which use a lot more travel than ours. So what I did was drill a new hole 20 mm further up from the old hole and 12.5 mm in from the edge like shown above in the photos. I then rotated the cable support on the caliper up a bit to line up with the higher position and then adjusted out the slack in the cable like told above. It works perfectly now which a good feel and only half the travel needed on the handbrake. 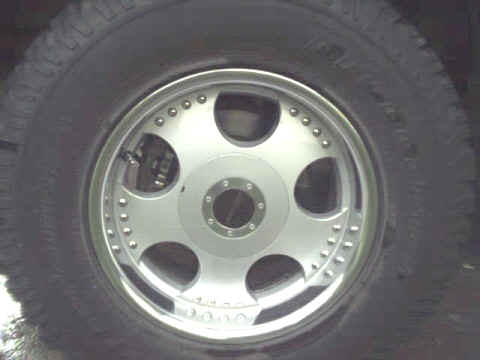 With these calipers there was no need to change the master cylinder as I still had stock height on the pedal and that what tells you if you need to change it or not. You will have a lower pedal if the rear needs too much extra fluid and the pedal will be noticeably lower when in use if the rear calipers are bigger than what I used. There is no point using a ZJ M/C as they are the same ( part number and all ) as the XJ but if in the US I have been told that a Firebird all disc brake M/C works well.