Always in a effort to be different ( one of the many reasons I choice the XJ in the first place as they are not common in Australia ) and the last of the lights that have not been change my taillights. I had already the European spec taillights as all XJ's have in Australia so it left only two choices, either standard US spec taillights which would be very different here or XJ Wagoneer taillights. I decided on the Wagoneer taillights as never liked the look of the US spec standard ones as way too much amber on them which I had got rid of on the rest on the car and they also make the tailgate look less high and wider! These are available from any Jeep dealer and you ask for a '89 model ( not sure on all the years they were made but they are the same ), and can be ordered with or without the chrome on them. I went with the chrome as already had a lot of chrome on mine with the grill and now the Laredo mirrors and door handles so it will tie in well on mine. 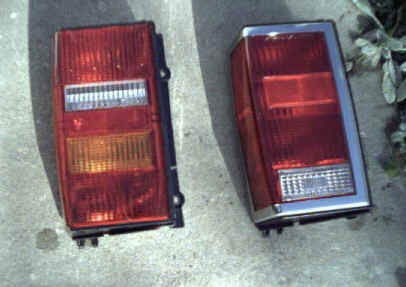 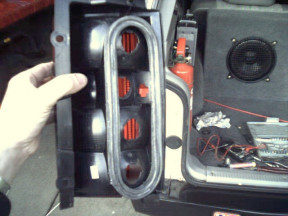 The one on the left is the Aussie standard taillight compared to the Wagoneer on the right. If you want to wire it like mine then you will need to have three stop/parker fittings plus a single turn signal one. Also needed is the small parker one that fits into the side that you can see in the photo above. This is the same fitting that you will find in the US in the front corner light as well as the side marker light above the flare on Aussie and European models. 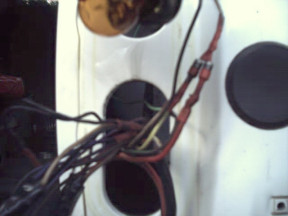 Now the Wagoneer light normally have a red flashing turn signal which is highly illegal here so I rigged up a colored bulb in the clear lens part that also shared the backup light. Now you can not just join the wires to the same bulb as the current will flow through all the turn signals if in reverse or run down the backup wiring to both sides when using the turn signals. The easiest way to stop this from happening is to solder in some diodes which work like a valve and only let the current flow in one direction. I fitted a diode to each supply just before the bulb by joining one of their ends together and to the wire from the bulb socket and then one end to the turn signal supply and the other to the backup light supply. Now it is very important that you wire them the right way other wise to power wont flow through them. The end with the stripe around the top is the side the power comes out so this is the end that get soldered to the bulb end  together with the other one. It is easy to check which way they go ask you connect them to a supply and measure to see if voltage come out the other end. They are very cheap at less then 50 cents each and I used the ones rated to carry 3 amps. Mine was numbered IN5404 DC. 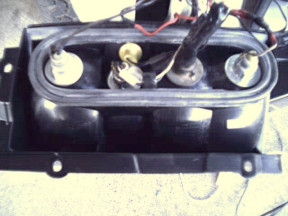 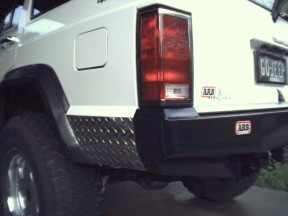 As I had already wired in the standard rear fog lights to work as a brake/parker by changing to a dual filament fitting I had only to add one more plus the single side parker. I also cut off the old backup fitting as did not need it anymore but used the wire from it to the turn signal as shown above. On my '95 Aussie model the wire colors were this: Brake - white/brown, Parker - blue/red, Turn - light tan, Backup - brown/green, Negative - black. 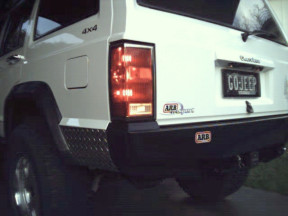 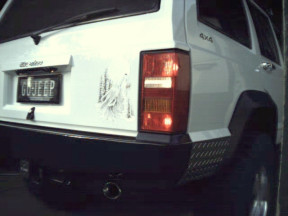 As you can see they light up very well compared to the old one in the right photo even after I had wired in the bottom fog light as a brake/parker. They also light up around the side which the old ones never did. I now have a total of six brake lights and eight parker lights! If you include the parkers I wired in on my clear corners and the ones standard in the headlights then I have twelve parkers! I first used colored globes made by Narva which looked a darker orange when off but as you can see above they were nearly white when on. The Wagner brand was not as orange when off but much more so when on! Cant figure that one out myself but just buy Wagner brand when you do yours. 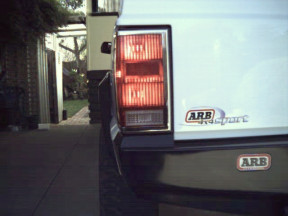 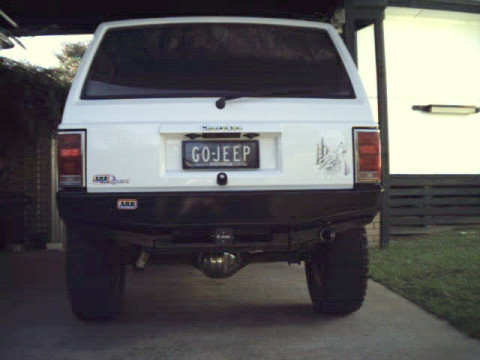 I would like to thank very much Ben Cushing from California for going to all the trouble of getting these taillights organized for me and Brent from BJ's Off-Road ( normally into FSJ's ) for getting them sent over for me. I tried for quite a while to get non-genuine Jeep Wagoneer taillights like those available for standard US and European Spec ones like these and even ordered a set from Checkers Autoparts while I was in the USA, but even though they list them for XJ Wagoneer's, when they arrived they were still the standard US spec ones. I have found them listed on the internet as well but if you check the part numbers they turn out to be the same numbers listed for the standard XJ. 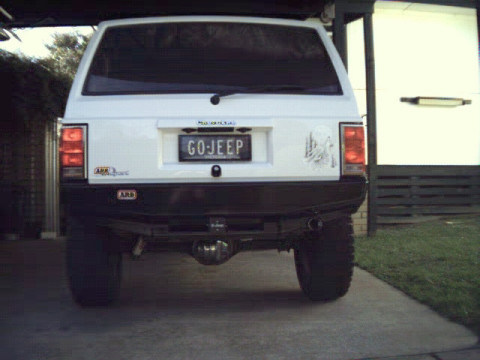 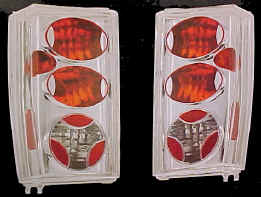 The ones on the right have just become available as of 9/9/02 and can be bought from here. There are a few other styles also and more on the way including ones for '97 on XJ's. So there you go, I have changed all the lights now on the XJ from 145/100w headlights to clear turn signals write across the front  which you can see here and now the rear as well. Now I know I wont see a combination like this too often.