There is an improvement in power and economy ( 2-4 mpg recorded ) with using one of these and in fact after '97, Jeep changed the design of the inlet manifold to do basically the same thing which is increase the size of the plenum chamber. I bought mine from www.macromotive.com which had the best price. They are now made in Australia using my plans and sold by JBits which you can contact them through here .

The following figures were done on a dyno directly before and after fitting the spacer with no other modifications in between and less than an hour apart! These are figures at the rear wheels of  TJ using the JBits spacer without the Helix Bore which does nothing anyway! As you can see it may not seem great but at 2000 RPM where most of your time is spent it is a 12.5% increase and at the JBits price worth it I feel!

The kit comes with the throttle spacer and spacers to lift the cable linkage bracket  plus gaskets and all the bolts required ( not  same kit shown above ). It will only fit Cherokee's that have 4 bolts that hold down the throttle body. You will see that it also has a helical centre which is supposed to help as well but it can cause a whistle at certain revs if you have a metal  intake tube instead of the stock rubber one. 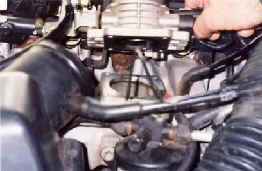 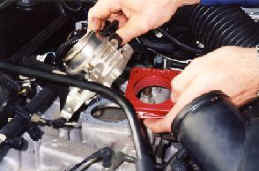 You simply remove the rubber hose and the 4 bolts that hold down the throttle body and lift it up. The spacer has an up and down which is marked so make sure it is the right way around, ( putting it upside down can get rid of the whistle on metal air hoses though ). My gasket was in good condition and stayed stuck to the throttle body so left it on and only added the bottom one instead. You then use the longer bolts and make sure you do not over tighten them as it is only alloy you are screwing into. 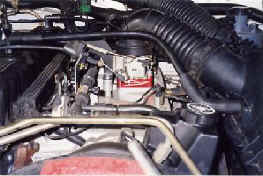 The next thing is to remove the three bolts that hold down the linkage bracket and place them in between and replace them with the longer bolts provided. I then adjust the auto kick down cable which only takes a minute by pushing down the button that is numbered 1 in the shot above and then you push back the end of the plastic where the cable comes out ( No.2 ) at the same time. Then just step on the accelerator inside the car until you hit the floor and you should here a ratchetting sound as it adjusts itself. This will make the auto kick down sooner if it was out of adjustment before. That's all there is to it. 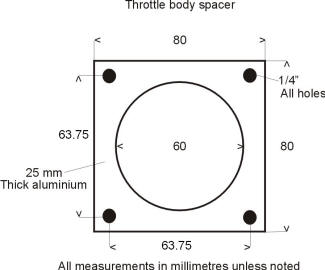 Above is the dimensions for those of you with access to a lathe and want to make your own. The bolts you need to get are (4) 6mm x 50mm for the throttle body and (3) 6mm x 40mm for your bracket spacers. The ones supplied with the spacer were grade 8.8. This is for a HO intake only ( '91 on ) and the pre '91's are completely different. Try this site for a non HO spacer or Rusty's now sell them too.