When you lower your bumpstops then you can re-claim the lost travel by raising the shock mounts. This can be done in a number of heights according to the amount you have lowered the bumpstops but never more than that otherwise the shock will bottom out. The exception to this is when you have more the stock compression which is easily checked by compressing both shocks and measuring the difference. For instance, I found that the Rancho 9000's that are sold for the 3" kit had over 1/2" more compression than my stock upcountry shocks. So I raised the shocks the extra amount over the bumpstop height to gain even more down travel. This also allows you to keep the same shocks if you are raising the XJ further and have lowered the bumpstop to clear larger tyres. I have made these in 1", 2", 3" and 2 1/2" height as shown. Just change the base size to match. These will be used in combination with two one inch hockey pucks and the extra half inch is taken up by the greater compression in the new shocks over stock. 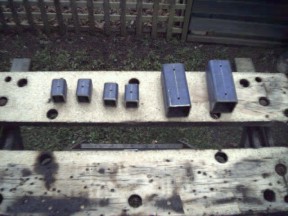 Cut the tube as shown in the diagram and I make the smaller tubing slightly shorter than the width of the larger one to give a good welding surface. Then drill making sure that the holes are off-centred in the small tube to allow enough room for the shock absorber bush. If using 50x50x3 tube as base then the bottom holes should be scribed through the original mounts as the extra width leave you less room to do it as shown. 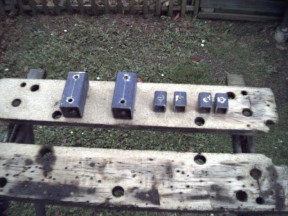 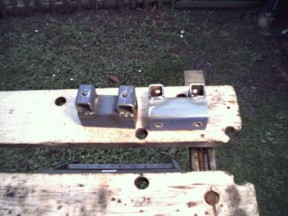 Once piloted, drill to final size and clean edges and burrs away. If you have access to a welder then you can weld them together as shown making sure the holes line up and are at the 60.5 mm centres with the narrow offset facing inwards. You can leave them without welding as the bolts and the bush will stop them from moving. 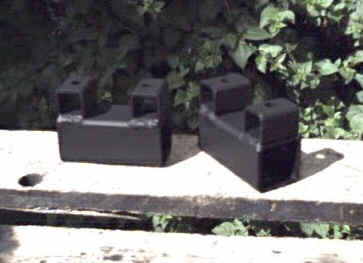 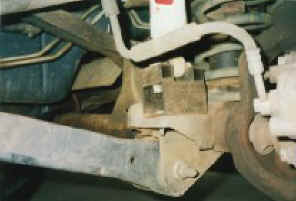 Then it is just a matter of priming and painting them. To install them you bolt in the spacer using the original shock bolts and then bolt the shock to the spacer using the longer bolts. If raising less than this height then one long bolt straight through the shock and spacer can be used but if spacer is a total of 2" taller then 3/8" grade 8 bolts should be used when going through both rather than shown with separate bolts. You could use this setup up on the rear with 77 mm bolt spacing instead if you didn't want to gain the extra clearance or do the more difficult route of cutting the bottom mounts shorter as shown on the exterior ideas page.