I was having trouble with keeping a stable engine temperature. Was not overheating but the temperature swung down from 195*F to 160*F every 30 seconds! Thought that the new radiator was letting the coolant flow too fast every time the thermostat opened. Tried 4 different ones from standard to Robert Shaw high flow ones all with the same results. So thought about adding a restrictor like that is used in race cars often but in addition to the thermostat rather than a replacement of it. I found fitting it not only helped stabilize my temperature, but also improve the cooling overall. The reason is that once the thermostat opens, you loose pressure inside the block which allows the coolant to boil off the side of the hot spots against your cylinders and inside the head. The restrictor keeps the pressure higher as well as not letting the coolant flow too fast through the radiator so it has enough time to exchange the heat with the air passing through. Bit like passing your hand under the hot water tap, do it quickly and it does not hurt, but do it slowly and you fell the pain as the heat has more transfer time. The theory is not a new one as some Audi's and Fords came with restrictors in their heater hoses to increase the efficiency of the heaters. Some would replace their hoses and forget to swap over the restrictor and wonder why their heater didn't work as well anymore. 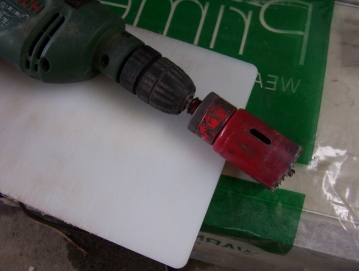 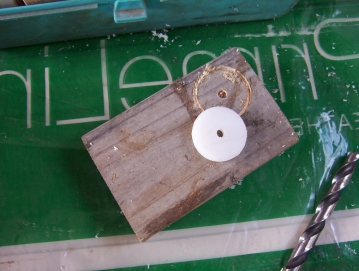 I made my restrictor from a nylon cutting board. Just used a hole saw that was the same diameter on its inside as the ridge on the thermostat housing that the top radiator hose fits over. Used a 1 3/4" hole saw that left a 1 5/8" plug to use. 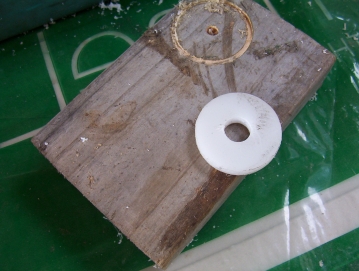 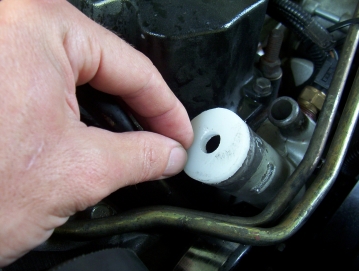 Then drilled the centre out to 1/2" as found this to the be best size after trying larger sizes. Ontrack4x4, who specialize in winch challenge vehicles, also uses restrictors and run as small as 7/16" or 11 mm holes to rise to pressure up to the most optimum. I have not tried that small yet. Fitting it is only a few minutes work with very little coolant lost. Just pull the top radiator hose and place the restrictor on top the thermostat housing. 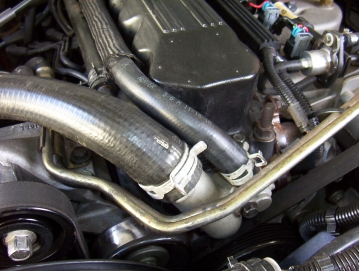 Well once the thermostat opened at the right temp, it just sat there idling with no fans at all ( I have twin electrics ) running with 24*C/75*F outside temperature. I had to bring the revs up to nearly 3000 before the temperature rose and the fans came on and cooled it straight back down. The needle fell until the fans switched off and then just sat there again. So it has been a success so far with a nice stable temperature at 190*-195*F with the fan coming on much later in time than before. This is showing the extra pressure inside the block and slower flow through the radiator is giving better heat transfer. Been running it like this for a while with no draw backs at all. 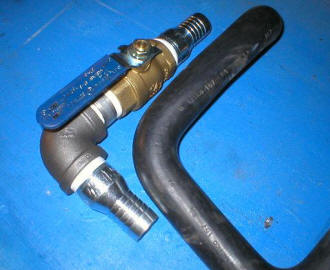 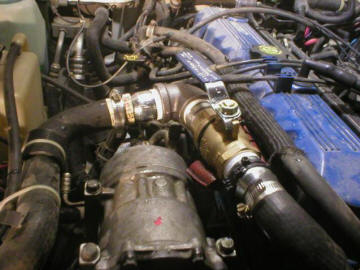 Also a guy in Canada followed my suggestion that he was suffering too much flow. But instead of adding a restrictor like I did, he added a valve so he could control the amount and easily switch to full flow in a second if it didn't work. Being mid summer over there at the time, he wheeled with it fully open and it shot up to 240 after only 1/2 hr on the trail. So he waited 1/2 hr for it to cool down but now it was the middle of the day and even hotter outside. He closed the tap halfway and went off again and it never peaked higher than 210 after that.

So this is something worth trying to get improved cooling and only takes a few minutes to drop a restrictor in. You just need to try what hole size works best for your water pump, radiator and thermostat combination. Adding the restrictor along with a  Stant Superstat Thermostat, #45359, it gave me the most perfectly stable temperatures I have ever had. If anyone else tries this, please let me know the results and what sized hole in the restrictor was used. Even just trying any old washer will do so long as it has the right outside hole. Don't know if I would leave in a zinc plated one in all the time due to rust, but then again, the whole block is raw steel and the coolant has a rust inhibitor in it.