Swapping to a 2000 Intake Manifold

In my quest for more torque at low revs and better efficiency my research came across a totally new intake manifold. These were fitted to XJ's, TJ's and ZJ's from mid 1999 to the end of production in 2002. You can use one from any of these models I have been told. These manifolds are good for 15 hp according to a Jeep engineer that had said that they had to come up with a way to bring the power back up after new emission changes cost them 15 hp. ( smaller exhaust ports and twin catalytic converters plus software changes among the changes ).  So that is why the newer Jeeps are only rated 3 hp more than before. Of course though if you fit one of these manifolds to a earlier Jeep without the different emission you get a 15 hp boost in theory. Those running strokers even more as JeepSpeed mention a 25 hp gain on there race engines just with this change. But remember that an engine is just a pump and wont flow in any more than it can flow out. The more modifications to the cylinder head, cam and exhaust system, the more benefit you will see. 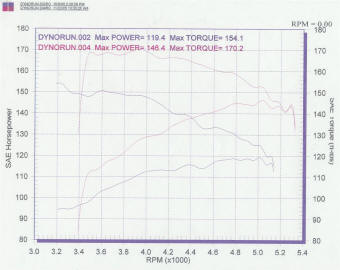 But now years later I have a dyno chart showing a before an after. DJJordache posted a write up here showing that swapping to this along with the Hesco fuel pressure regulator and 99 injectors, as I have also done also, showed 26.9 hp and 19.7 rear wheel torque at the rear wheels comparing on the same dyno before and after the swap. Click on the chart above to see a larger view. Now that is at the rear wheels and we all know of the parasitic loss of the drivetrain with a XJ running at a reported 22% and the ZJ used for the dyno even worse with as high as 30% being mentioned with the auto. So that is quite some gain but can only be achieved with a good set of extractors, exhaust and intake filter flow as was used here. It must be noted that some of this gain would have come just from the injectors especially if the old ones were old and dirty. Also I have seen more dyno charts since and 96+ Jeeps with OBDII systems do not respond as well and have suffered up to 3 mpg fuel loss so would not be worth it unless you have plenty of other modifications as mention before. Also those that have not used the later injectors along with the required higher fuel pressure to run them, did not get as good a results. Basically if you have a 96+ Jeep with few flow modifications, it is not a worth while swap. 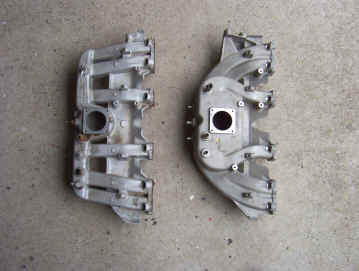 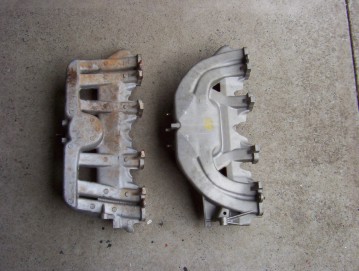 Here you can see my 95 on the left and the completely new intake manifold on the right. The runners are far more curved leading to the ports without the harsh right angled bends that the earlier ones have. You can also see that the plenum chamber which sits right under where the throttle body bolts is much bigger. I bought my intake from USA Driveline in Victoria which also have an office in Queensland but will send anywhere in Australia. They bring in a lot of XJ's from Japan which they strip for parts to sell. 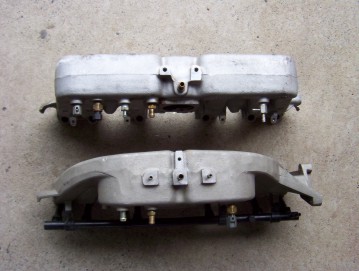 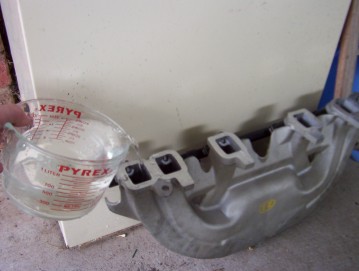 The best way I thought of to show just how much bigger the new intake is was to block off the throttle body by cutting a canvas gasket to mount underneath the throttle body before bolting it down and to block off all the vacuum ports. I then used a measuring jug to fill the intake with water until it reached the top of all the ports. The old one took 2.6 litres or 2600 cc's to fill and the new one an amazing 4.3 litres or 4300 cc's. To think that a throttle body spacer only adds .076 litres or 76 cc's you can see how much bigger in volume this is without the sharp bends in the runners to boot! 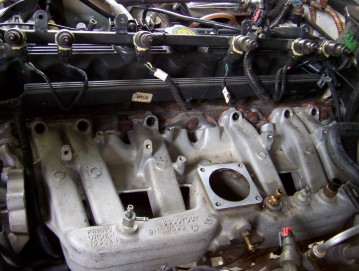 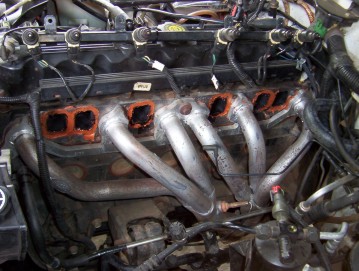 First thing is to pull the airbox out of the way to give you more room to work in. Then strip everything from the intake remembering where the hoses come from. To remove the fuel rail you remove the fuel tank hoses by depressing the white nylon clips each side and sliding it back. Then remove the four bolts holding the rail down and wiggle the rail upwards at each end and along the rail pulling back hard until it pulls free. If you are not changing the injectors this way saves you from worry about leaks from the upper O rings. You can clean up the bottom ones by removing them and soaking them in Diesel for a while and giving them a good rub if they are still in good nick. Otherwise you will have to buy a complete kit to replace upper and lower ones. There are four upper bolts to remove as well and another four underneath. I was able to get the first two underneath at the front of the motor from above but the last two had to be done lying on the ground and used a ratchet ring spanner. I left the extractors in place ( held on by the very first, middle and last bolts ) as they had only been on a year and the gasket was un-damaged when the intake was removed. The RTV Copper silicon just rubbed off with my fingers. 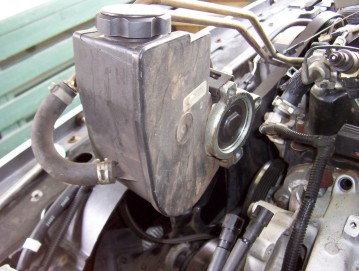 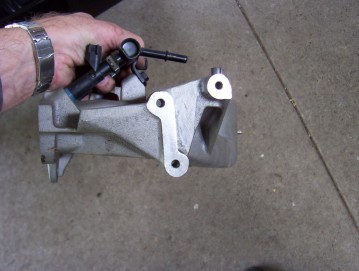 Now this is where it can vary between models but the Australian ones are like mine. The LHD ones are easier as don't have the fan mount below the steering pump like shown so only need the same pump bracket that the intake is off. In the US models before '97 I believe do not have the power steering pump mounted to the front of the intake so you would need to buy one of these and it's bracket. My pump was attached to the fan mount but the newer ones attach to the intake itself like shown above. 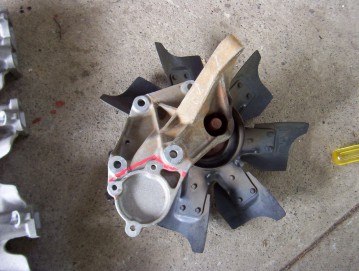 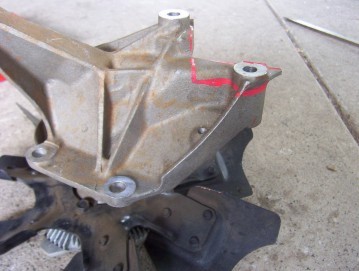 So I had to remove the pump part shown in red from the fan mount ( RHD models only ) so that it would not interfere with the pump bolting to the intake instead. I left as much as possible of the original fan mount to give it strength. When I compared it to a Wrangler set up with the late model intake this looked stronger than the stock setup. I still left part of the upper bolt boss in place for additional stiffness even though you can not use it. You must however remove some off the back of it as it hits the intake otherwise as shown in the right picture. I have since removed more as I since fitted an electric 16" fan  ( must pull around 2000 cubic feet ) into the original shroud.