The Jeeps have what is called Unit bearing or Hub Assemblies. The bearings themselves are not serviceable so you must replace the whole hub assembly when they wear out. You can check to see if replacement is needed by jacking up the wheels and grabbing the tyre at 12 and 6 o'clock and push with one while pulling with the other hand back and forth feeling for play. There should be none. These are not difficult to change but does require a 36 mm socket and matching impact gun or breaker bar to go with it. Takes less than an hour to do one side if you have the right tools. I must say thank to Peter from FMA in Bayswater for letting me use them. Also to Dan96XJ for talking the photos while I was changing the hub on his Jeep. 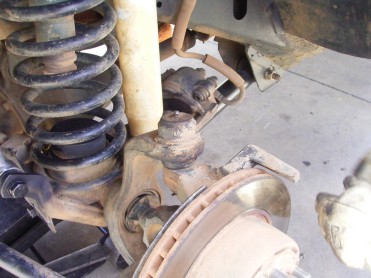 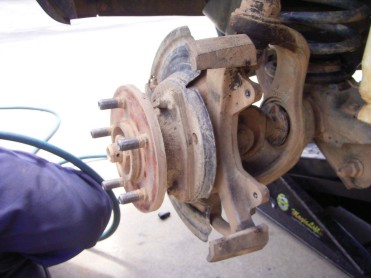 Start by removing the wheel and then the two bolts that hold on the caliper. The caliper can then be removed by hinging from the top outward as shown here. Place the caliper on top of the lower control arm as shown and then remove the rotor. It may still have some assembly clips holding it on which can be discarded. 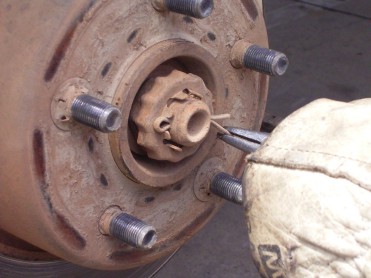 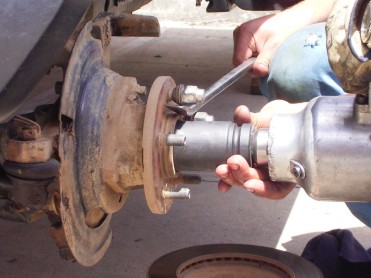 Remove the split pin and nut retainer to allow access to the axle nut. I used a 1" drive impact gun with a 36 mm socket but a breaker bar would also have done the job. To stop the hub from rotating while doing this you need to use a pinch bar against some wheel nuts threaded onto a couple of studs or have someone stand on the brake and remove this nut before anything else. The other way is put the wheel back on without the centre cap and lower it back on to the ground to stop it from spinning. 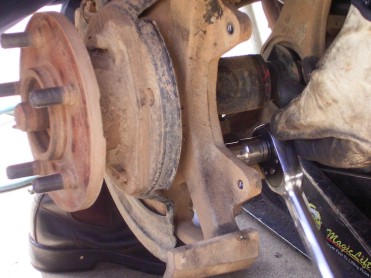 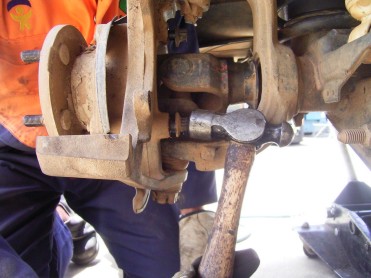 Using a 13 mm socket you loosen the three bolts holding the hub in place but only threading them out by about 1/2". Then tap on the heads in turn working you way around to push the hub free. Be careful not to damage the head which can be protected using a socket left on the head or a nylon head hammer. If you are in the salt belt I have been told that putting an old wheel or your spare and using a pry bar you can lever it out by prying between the back of the wheel and the knuckle. 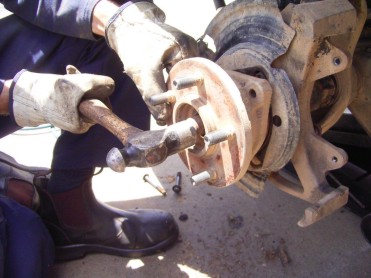 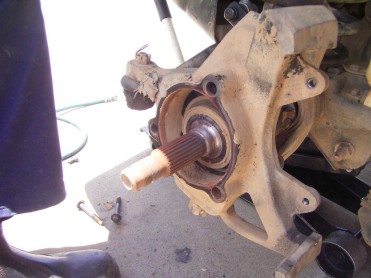 Once the hub is just free of the knuckle tap on the end of the axle to free it from that. There is no need to remove the axle from the housing. 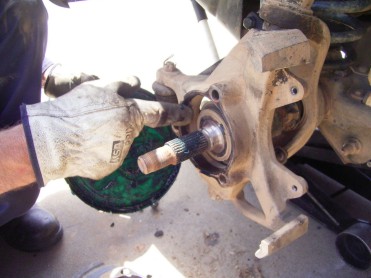 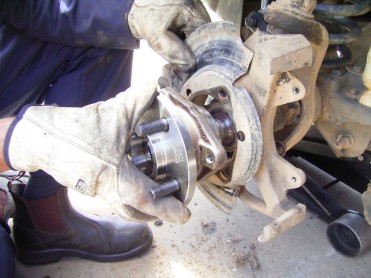 When re-assembling use a little axle grease or anti seize on the splines and the inside of the knuckle. Then just slide the new knuckle in place and if you have a torque wrench handy, torque the hub bolts to 102 Nm ( 75 ft. lbs ) and the axle nut 237 Nm ( 175 ft. lbs ). Easiest way to torque the main nut is to put the wheel back on without the centre cap and lower it back on to the ground to stop it from spinning. 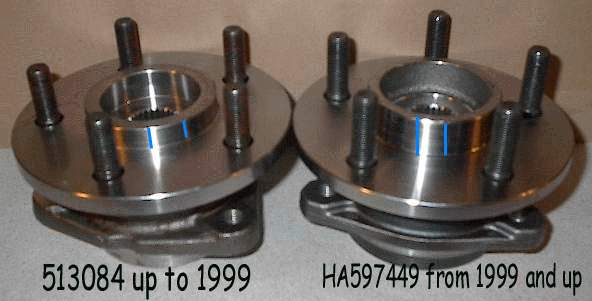 I would not buy these from a dealer as they are $769 AUD each here in Australia but be careful of cheap Asian made ones too as have had to replace them after only 18 months of little use from a well know Jeep shop here. Cheapest I have found that are at least assembled in the USA from USA and China components ( I'm told only the seals come from China? ) are from Net Auto Parts. For Australians, that company has now set up a page that includes shipping via surface mail ( can take up to 3 months for delivery so ask for the air freight price if you want them quicker ) for either one hub in the left column or for a pair in the right column. Ask also about a upgrade to Timken bearing hubs which are considered the best on the market but cost more but are fully US made and assembled. You must remember that the hubs changed in 1999 and so you need different ones after that. The easiest way to tell the difference ( there are a few others ) is that the centre support boss will be quite a bit taller than the one shown here if it is the later one. Notice where the blue lines are showing the difference in height. Pre 99 it is 12 mm high and the 99+ is 19 mm.  Only in '99 can you have either so check first.