I have been looking for the ideal way to vent the hot air out from under the bonnet ( hood ) for years now while travelling slow when the heat build up is a problem. I was thinking of just adding some vents similar to what Jeep added to the ZJ Grand Cherokee bonnet when they first fitted the V8 option. These same vents were also added to some European XJ's as well as a few that first came to Australia in 1994. The problem is that I was not as keen on the water and dust falling straight through on top of the components directly underneath. So that when I started thinking about adding cowl as they are rearward facing you don't have the same problems as with the open vents. Check this link out that goes into some detail about them. I made a cardboard mock up to make sure it would vent properly and then had to convince my wife on the idea! I was first going use the one fitted to a Nissan GU Patrol and turn it around but when I bought one I found that it was not symmetrical which showed up badly when facing it the other way around .

Then I starting looking at other ones to fit like those from JCwhitney and also the full fibreglass replacement one from Usbody ( TFCH-3 which well fit 84-01 as the hoods never changed! ) but then my good mate Ben Cushing alerted me to this all steel bonnet from Reflexxion. Well once my wife saw that one she wanted it straight away.

I bought mine off ebay from a company in Arizona called Trix Motorsport but they now don't have a web site. You can now buy them at many places if you just Google Reflexxion Jeep Hood. Parts Train had the best pricing last time I checked. Rumour now is, (2012), that these are no longer being made. Apparently the mould has been damaged and they were no longer selling in high enough numbers to warrant them repairing it or getting a new one made to replace it. This leaves you only the one from USbody as linked above. 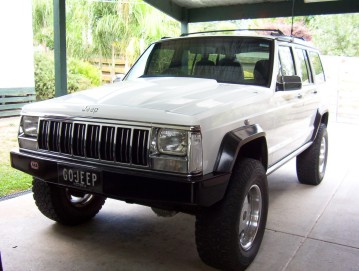 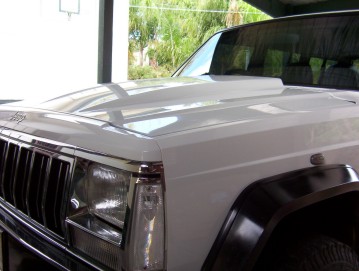 As you can see here it has very good lines and rises 2" higher in the centre section, ( you could fit a 3" throttle body spacer now if you wished. ) I was very surprised to find that this steel one weighed exactly the same as the Usbody fibreglass one. And from many reports, and even on their site, you need a lot of work and often filler added to make them ready for painting which makes them even heavier! 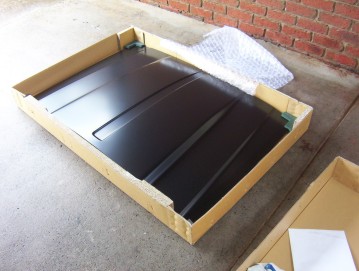 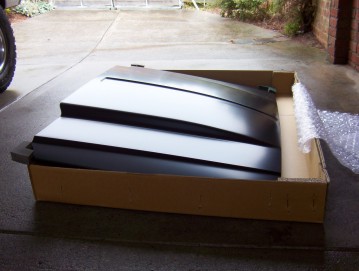 It comes very well packed and arrived all the way to Australia without a single bit of damage. The painters only had to give it a rub down and could then shoot it straight away with the top coat. You also get a good view here of the centre recess pressed into the top that the fibreglass one misses and does not look as good as this. 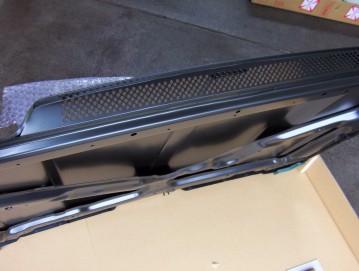 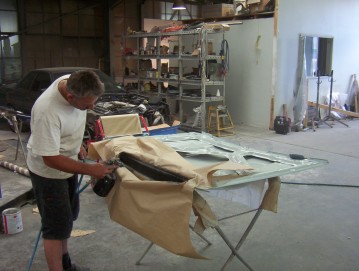 Shown above is the grille at the end of the bonnet. I will just use a flexible magnetic strip over this when I do very deep rivers crossings ( the same as they often use for fridge magnet ads ). My painter David suggested painting this black to make it match the grille under the stock cowl. It does set it off nicely. I looked closely at the frame and every single hole and pressing was exactly the same as my stock one which leads me to believe they use a Jeep original frame with a new skin fitted to it. I even had to fit the same packers that my old bonnet had under the hinges to make it line up perfectly. 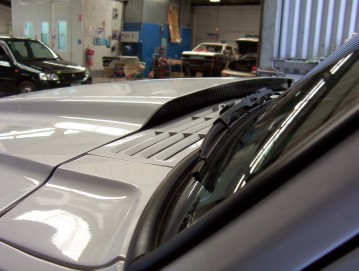 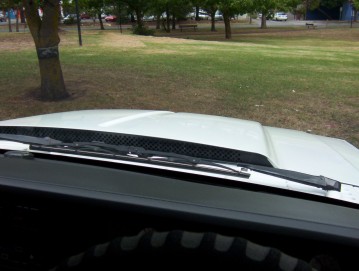 I removed all the old hardware from the old bonnet and fitted it to my new one. The only thing I had to replace was the two front clips that holds the bonnet release rods as could not get the old ones out. The cable ones I had no problem with. One thing I would check after you have fitted it is to make sure that the raised centre section does not hit the wiper when you lift it to put the support in place. I had have a gas strut to open my hood and had it as high as it would go with the stock hood but found the it was too high for the new one. I don't know if the stock height is fine or not? From the drivers seat this is the view you get, it is only just higher than the wiper arms and does not interfere with forward visibility. 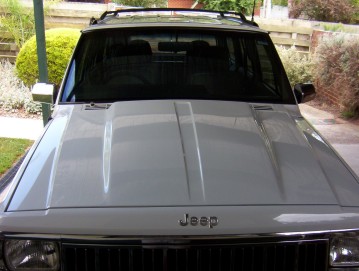 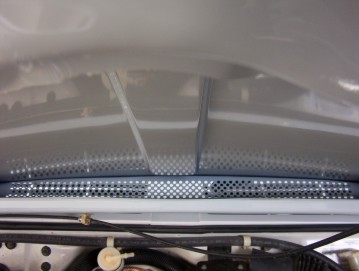 I tested the bonnet by taping short bits of wool to it around the opening and at the trailing edge at the top to see what the air currents were doing. At low speeds the hot air was venting directly from under the bonnet and up the screen but as the speed rose it drew cold air in. It sucked it in from the air stream flowing over the bonnet as well as from the first half of the stock cowling on the open side. This air will keep the hot air down away from the intake manifold and be sucked out underneath the car without changing the low pressure area directly behind the radiator. This works out perfectly as you draw more air through the radiator at four wheel driving speeds by letting the hot air rise and vent out through the rear opening which is when the greatest build up of the hot air is due to lack of air flow. Then it switches to bringing in cold air at road speeds when you already have enough air passing through the radiator and it keeps the rear of the engine bay cooler by stopping the hot air accumulating there. I have also noticed that it takes far longer now for the twin thermo fans to switch on when sitting still on a hot day showing that the venting is helping a lot. There has been no increase in noise from under the bonnet while inside or smell from the engine bay while travelling. It has helped a lot in some very heavy sand running ( over 220 kms of beach running in deep soft sand in 40* C or 100*F + ) that I did soon after. Have done many trips since crossing deserts while towing my offroad trailer.

Just heard from TC on the NAXJA forum who had added a bolt on induction scoop that was similar and recorded a drop of 70*F in under hood temperature compared to before. He now records only 20*F above ambient under the hood instead of 90*F! That has got to help not only cooling but a drop in intake temperature ( equals more power as every 10*F drop in intake temp = 2hp from memory ) as well as extending life of other components like batteries which are known to have a longer life in cooler temperatures. Even plastic and rubber parts etc. would be better off!