There is nothing worse than when in low range going down a slope with the auto in second gear and having to slow up just a bit for a obstacle or corner and to have the auto change back to first throwing you forward in the seat. You then have to speed back up a bit and shift the gear lever back to third and then back to 1-2 position until the next time you slow up a bit. It's fine if the hill is steep enough for using first all the way as it will stay in first until the red line but you don't always want to be going that slow! Now this modification will allow you to leave it locked in second gear using a switch to hold it there.

If you have a Cherokee made before 1997 you can make this modification, ( 97 on it will work but set off the check engine light and stay on for 50 key on and offs! ). The auto is controlled by solenoids and with a combination of powering them you get the different gears. So to hold it in second gear while the shifter is in the 1-2 position you just need to power the right solenoid to leave it there as the chart above shows. In first gear only the solenoid No.1 is powered but for second gear both No.1 and No.2 solenoid are. So by supplying power to the second solenoid via the switch we force it to stay in second gear even when the TCU ( Transmission Control Unit ) switches off power to it when revs drop lower enough for it to want to switch back to 1st. 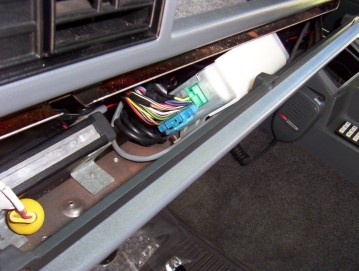 You will find the TCU behind the lower panel under the glove box ( remember mine is a RHD so it is on the other side but still under the glove box ). To access it just remove the screws along the top and one under that panel to pull it free enough to get to it. You will find that the plug has a C and a D side and numbered 1-16. Find the yellow wire coming out of D16 which is a 12V supply wire and attached a wire of similar size or greater ( 16-18 gauge ) to this and run it to your switch. Next wire to splice into is C15 which is violet and this is the one that powers solenoid No.2 when given 12V and run that to your switch as well. Now it is recommended that you fit a diode to this to stop current following back through the C15 wire into the TCU from the switch. So make sure the diode is fitted to let power go to the auto and not into the TCU. I have been running the last 4 years without this diode but added one recently just as a safety measure anyway. It's up to you. 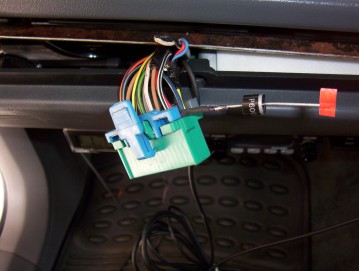 Here you can see the diode soldered onto the C15 purple wire. The silver strip around the top shows the end which the power will only leave from. To this end the other half of the purple wire and the wire coming back from the switch is soldered. The next picture shows the terminals of two switches of only one is needed in this case. So the wire you attached to the yellow D16 wire at the TCU goes to the centre pin. Then a wire on the right pin goes back to purple C15 wire or the top of the diode. The right pin is only needed to go to ground if you have used a switch that is lit when switched on. 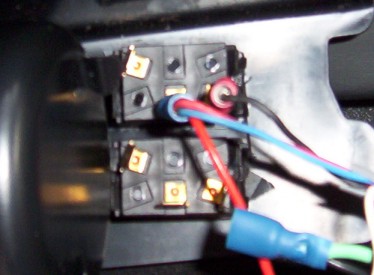 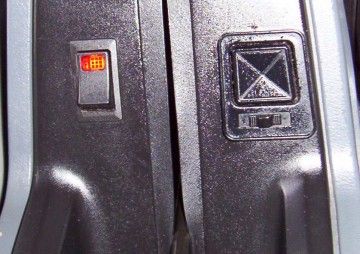 The picture above shows the power wire with three wires but is only because the wire was too thin as I will be supplying the other switch next to it as well which is covered later. The wire going back to C15 is attached and the green at the bottom is about to be which goes to ground using one of the screws hold the console to the floor. I fitted the switch in the front of the console as above and show here how to remove it. I cut out a section to fit the rocker switch into and ran the wires to it through the bottom of the console bin itself. I had to cut a matching hole inside the bin to fit the switch in.

You can use the switch in 2wd or high range as well and do second gear starts like some European cars have to help starting off on icy roads. When in the off position all will be just the same as stock. Hitting the switch by accident at highway speeds will not do anything but select third ( third is solenoid No.1 off and No.2 on ) if not already in overdrive. Once the TCU wouldn't go into overdrive after using the switch but turning the car off and back on again reset the TCU and had no further problems.

What you can also do is fit a switch to lock the torque converter for steep slippery descents of a short distance. I recommend this for emergencies only as you do risk damage to the converter lock. The reason is that the torque converter lock is only designed to run under light load conditions with the force coming from the engine side. It releases anytime the force transfers and comes from the wheels which happens as soon as you are rolling down hill with no or little throttle being used. It also switches off when you plant the foot going up steep hills even when over the 65 kph or 40 mph speed it is programmed to engage at. There was a unit used on Nissan Patrols when they first came out with this feature of an electronic converter lock and had to be withdrawn from the market as the high failure rate after using it in high load conditions for extended periods of time. I only giving this information for you to use at your own risk. I think it is worth having when on a very slippery down hill when using your brakes will only speed you up and lose steering control at the same time. I rather take the risk and switch it on to slow my descent and get down safely. Mind you many have used this now without problems yet but just keep what I said in mind and don't over use it and let your auto cool down before using it again would be my advice! 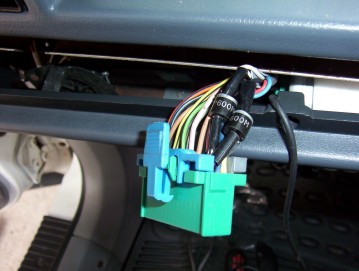 Now the wire you have to tap into is a white wire with a black trace that is C14 on the plug. Cut this wire and add a diode just like the one used above and solder the white wire to both ends remembering to keep the stripe away from the plug. To this far end also add the wire that comes from the other switch. The best part is if you have placed it next to the other switch for the 1st gear lock out, you can just jump the same power and ground wires across. 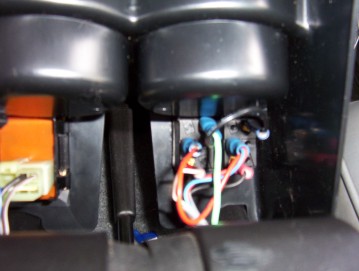 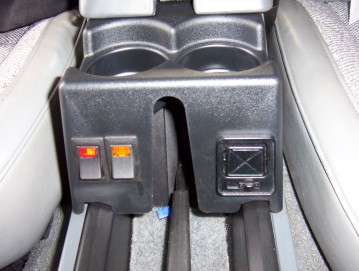 I have added the switches now to the drink holder opposite the mirror control. I chose the red light for the torque converter lock as something you don't what on by mistake and the amber for the first gear lock out. If you leave the former on and come to a stop, it will stall the engine just like a manual does if you don't depress the clutch.

You also have the option of making a full manual controller that can be switched off for normal auto function or on to select each gear as you need them. Kevin Fletcher made up a full schematic of how this can be achieved including a digital display showing what gear you are in. He has this all on a pdf file you can download from my site here. If you have any questions about it at all you should contact him directly and not myself. He can be found of the NAXJA forum under the screen name of Fletchs90xj. 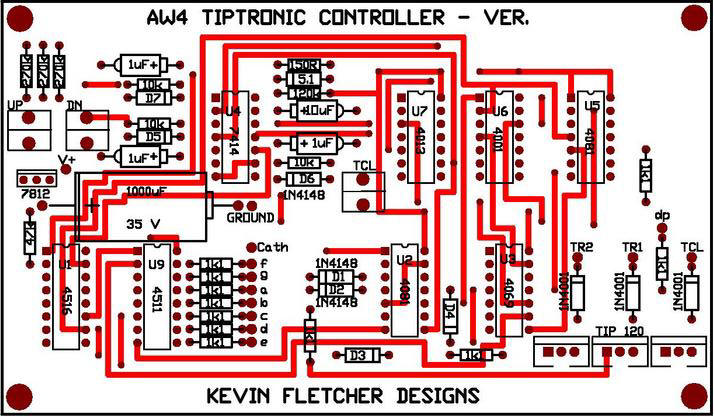 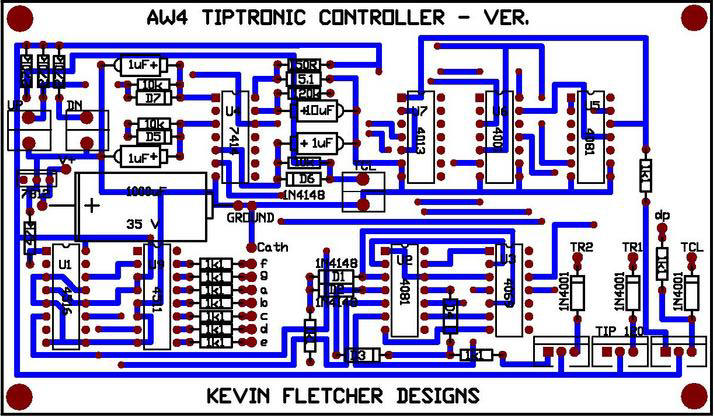 The above PCB layouts of the controller were provided by Antonxj also from NAXJA. He is going to produce these boards to make the building of them easier or even sell them already made up. See the forum posting for more information.