I ended up with an extra auto pan and as I wanted to ad cooling of the auto I came up with this idea. I have seen deep sumps for you auto behind Fords and Chevy's for years but have never seen one available for our AW4. So thought I would join the two pans together which will ad cooling in two ways. The greater fluid capacity and the fact in is exposed now to more of the cooling air stream as well. I also thought this was better than fitting a bigger cooler in front of the radiator as they extra heat removed would heat up the condenser and radiator behind it placing more strain on the cooling system. I have since tried out on a trip of 6000 kms with a heap of sand dune driving along the shores as well as crossed 300 of them when we took a trip further inland.  Temps for that bit were above the 100*F all the way getting up to 42.7*C or 109*F! The deep pan made a big difference that I could tell easily which surprised me. Before when running and towing in hot temps I would have trouble of the auto not kicking down when it should. When on cruise control it would even lose speed so would have to manually shift it all the time. Not any more at all which was just great. 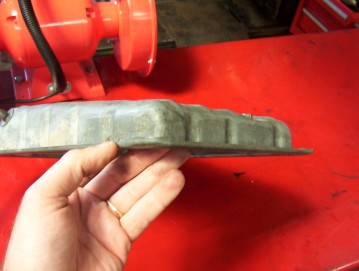 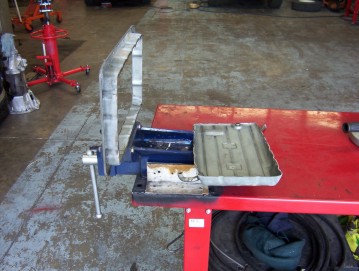 First check to make sure nothing is going to be in the way of a deeper pan like the exhaust. I know on stock '96 ones at least that they go slightly under the pan which would get in the way of such a conversion! I was fine with my 2.5" system so I then scribed a line 30 mm below the flange line all the way around. You cant go much lower as the flat part around the sump plug stops you. I then simply cut the bottom off the pan with a cut off wheel on a grinder to end up with what is above. 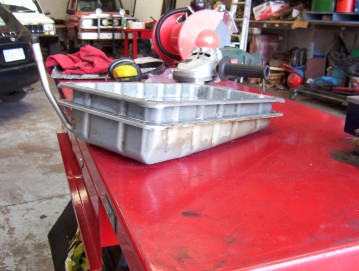 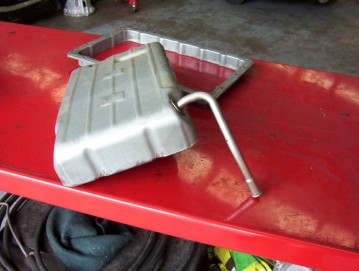 I sat the two together like shown and even thought about welding it like that as would be stronger and easier. But doing so makes it very hard to do the bolts up that are partly obscured by the transfercase cross member. Might also leave a spot for mud to gather. So it was off with the flange off the other one. 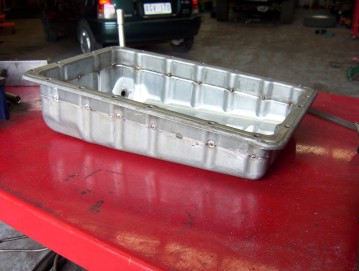 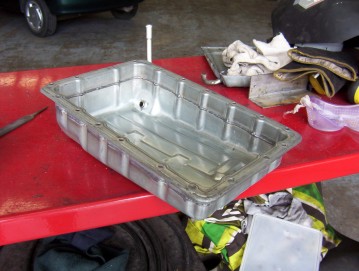 You will have to do a bit of panel beating in the corners to make it match up properly. Also grind the galvanizing off where it will be welded to get good penetration. Make sure that you have no gaps around it when you mate them together and tack them on all the ribs and the middle of some of the longer spacings. 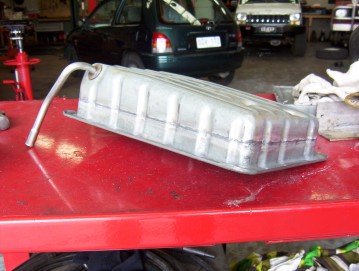 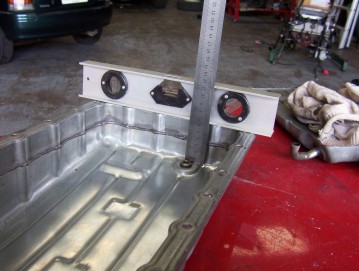 I welded between the tacks one side at a time offset by one spacing and always skipping one as well. Then went back to weld the in-betweens. This way I got no distortion or twisting either from the welding. It was then fully welded around the outside. Do a leak test and fill it with water to see if there are any leaks. Pay close attention to where you have started and stopped at the tacks as this will be the most likely place for it to happen. I then checked the difference it the height for the next step. 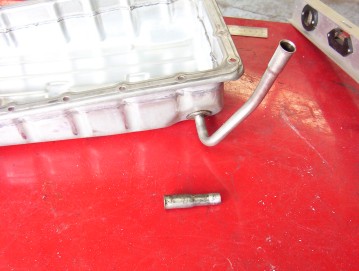 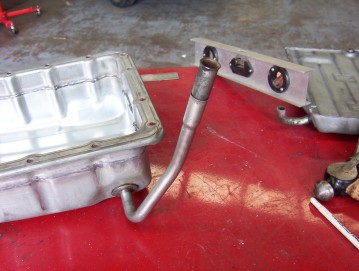 Now the dip stick tube has to be extended the same amount as the height difference between the stock and the new dropped pan. For me that was 30mm which was exactly the length of the stepped up bit at the end of the filler tube. So cut that off with the same amount of the narrower section so it fits into the original one perfectly with a bit of Silastic to hold it there. This makes sure that the oil level in relation to the pickup is still the same as before. It you did not extend it and lowered the upper tube down you would have the same amount of oil as before the modification and the pickup wouldn't reach properly either. There is no need to extend the pick up as well as running out of oil is never a problem with autos anyway and the old one never reached the bottom either. 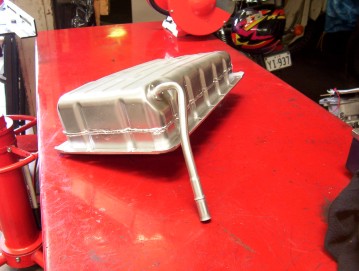 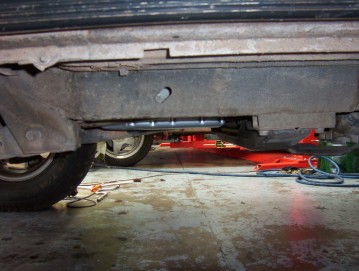 I just hit it with some chrome paint I had lying around on the outside only. Do not do the inside as it could dissolve and mix it with the oil. It is not needed anyway as cant rust with it covered in oil all the time. Don't go overboard with the paint as it will act like an insulation layer so I just did enough to cover it and even left the bottom of it. Don't forget to add the magnets back in the bottom of the pan and I added the extra set that came with the new pan as well. Just follow the instructions here if you have never serviced your own auto before.As you can see with the above picture it does not hang down much at all. The picture still shows more than it really is below the frame as you can still see the bottom of the pan in the shot. I measured it and it was 2" above the cross member and 1" below the frame. Don't forget though that I have a 1" spacer to drop the transfercase so it would be even higher without it. It is well protected there as it is still forward of the centre of the wheelbase so the ramp over angle is un-changed and I have never come close to hitting it at any time. I don't know if those that play in the rocks a lot have ever hit their stock pan but I haven't heard of it anyway. Filling it took 7 litres for some reason even though when I filled it with water to check it's capacity it should have only taken 2 litres extra over the stock 4 needed for a service. Maybe because it was left to drain over might when I letting the paint dry. You could add the bottom you cut off the pan and stitch weld it to the bottom of this pan if you do a lot of playing in the rocks to act as a skid. The pan is quite thick at around 2 mm so quite tough. I am not sure if the extra bottom would increase or decrease the cooling when left with an air gap in between for airflow? 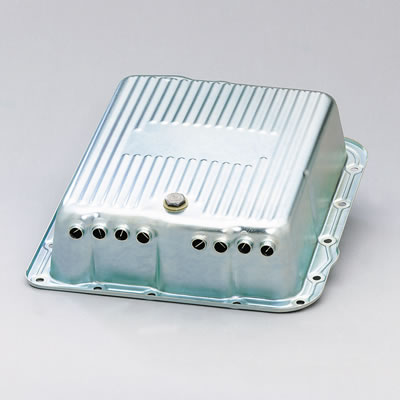 How about this for even more cooling now that you have the extra depth needed! These are sold at Summit for the 700R4 and others but not for the AW4 but it does not mean you cannot make one. Just drill a series of holes at the front and rear of the sump the same size as the tube you are going to use. I think 1/2"- 3/4" would be ideal and as thin as you can weld with the welder you have. You then just weld around the ends and then fluid will be cooled by the air passing through the inside of the tubes. Also what makes them even better is to get a strip of thin tin the same width as the inside of the tube and twist it over and over to make it look like a cork screw and then insert into the tube. You can see this pan already has them as it increases the cooling even more as they found without them the airstream would heat up on the outside touching the tube walls but the middle would remain cooler. By spinning the air it mixes it making sure all of the flow is cooling. The makers of this pan claim "A Derale transmission pan can double your transmission's life by dropping its temperature 20 to 50 degrees. These pans hold about one extra quart of fluid and have heat-conducting metal tubes on the bottom".