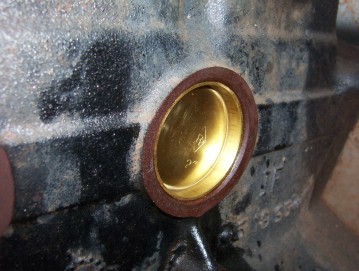 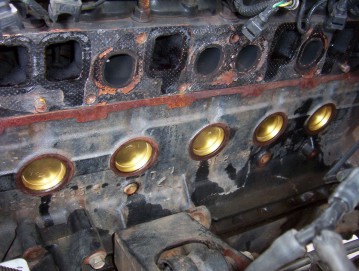 Drive the plug in until you just see the tapered part of the block finish as shown which is about 3 mm or a 1/8". So now I have a pretty row of new welsh plugs but the hardest still to do. I also removed and later changed the engine mount too which had cracked while it was easy to get before moving on. With it still out it helped in the next part of the process. 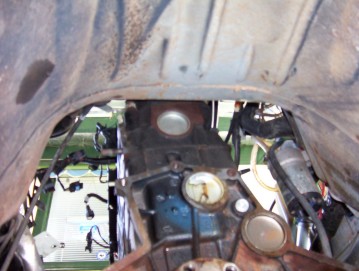 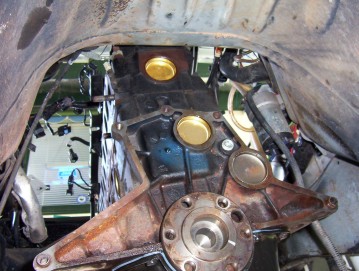 By far the hardest part was the two at the back. Once the driveshafts were out and the cross member and one engine mount removed, I tilted down the whole lot.  I was then able with long extensions remove the top two most bell housing bolts. Do these first as often they are left until last which places too much strain on them making them difficult to remove. Support the underside of the sump and remove the auto and transfercase as one. As you can see above, you can get to both plugs with the engine tilted down as far as possible. The bottom most plug that was not changed is the cam plug. Also shown is the one welsh plug that caused me all this work as you can just see where it started leak a few days before. 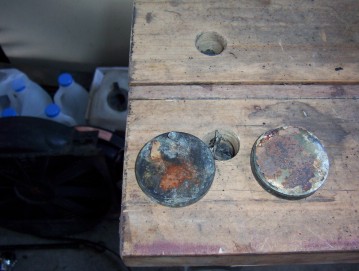 The final picture shows how much worse the rear block plug was that was leaking compared to the ones from down the side. What I did find was that there was still casting sand around that plug area and it took me quite some fiddling to remove it. I think this may have contributed to the accelerated corrosion over all the others.