This is just a quick write up showing how I made some shields for my shocks as they were getting badly damaged from all the 1000's of kilometers I do on gravel roads every years in the Outback. This will not only stop the paint from being stripped off but the many dents I was getting as well. 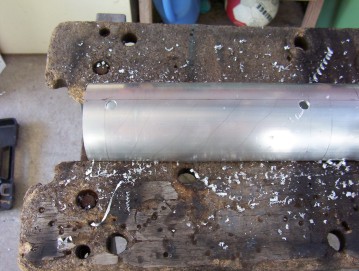 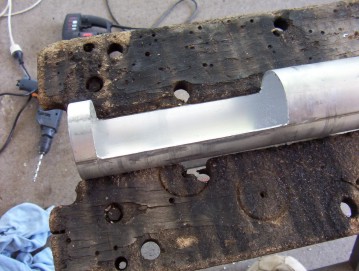 I wont go too much into measurements as every shock is going to be different. I used 3" aluminum pipe with a 1/8" or 3 mm wall thickness so I could clear the adjusting knob on my Rancho 9000's. But you could use less if you have non adjustable shocks. They were cut to go from the bottom of the boot to the bottom of the shock body not including the bush which in my case was 260 mm or just over 10". There are 2 bands left to act as supports and the corners were drilled and then I simply jigsawed the back section out. It pays to keep spaying oil onto the blade to stop the blade getting from getting clogged up. 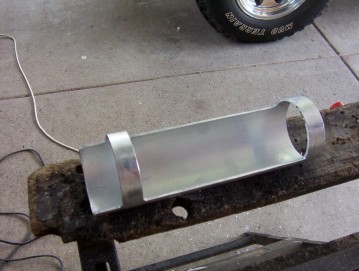 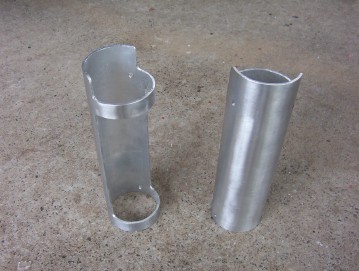 The reason the back side is cut out is to keep as much air flowing around it to allow the shock to keep cool. You will notice also that one of the bands is 30 mm from the end and that was too clear the adjusting knob at the bottom of the shock. The bands was divided into 3, starting at the middle of it, and only the 2 of these points in the main body were drilled out and then threaded for a 3/16" UNC screws giving 4 in total fixing points. 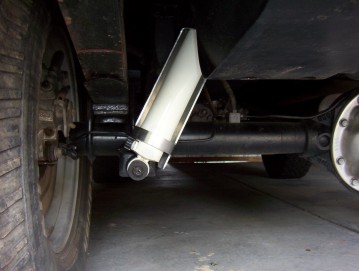 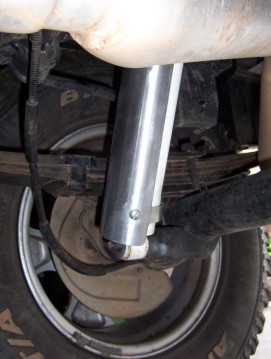 The shields were simply slide over the shock after it was taken off the bottom mount and then the four 3/16" mushroom head bolts were screwed in evenly to pull the shield away from the shock on the forward facing side against the back of the bands. The bottom screws on my shock pressed against the welded seam where it is very ridged. The upper ones will never carry much force being up so high and even if it were to dent a bit after an impact it would be still far less than what was happening before unprotected. You must use Loctite to stop the screws backing out after many corrugations. I would do something differently if it was a mono tube shock. Cut a slot in the bands and use a exhaust clamp around it after placing a packer of some sort on the front to stop it going hard against the shock. 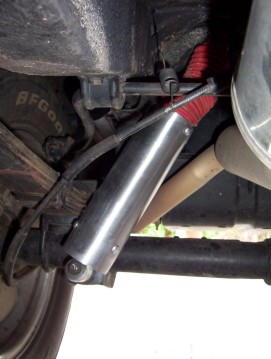 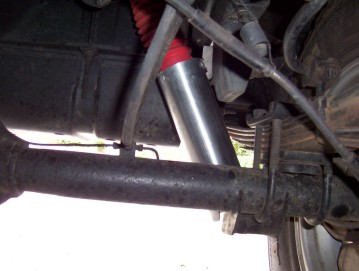 They have now been on for around 18 months and have stayed firm after 15,000 kilometers including a few thousand of Outback gravel roads on my last trip. I used a temperature probe to compare shock temperatures between the front un-shielded shocks and the rears only seconds after pulling up after a long corrugated gravel road in the Flinders Rangers in 38*C or 100*F heat and there was only a 2-3 degree C difference. That could even come down to engine and exhaust heat being higher for the back shocks and the shields may even keep them cooler than before.