I don't know if this is mainly a Outback touring problem but sitting at 80-100 kph for hours on end and doing around 4000 kms each trip on roads like this really strip all the paint of the door sills and lower doors. I used to run 2" wide rubber molding on the sills to protect them but it did not help with the lower part of the doors. So I thought if I can get something to stick out as far as the widest part of the door that it would protect them but it has to be able to attach to the door sills and no lower so I would not lose any ground clearance. I noticed that on the back of trucks they often had a hollow rubber strip the cushion the impact when they back up to loading bays. I found out that this was called 'Docking' rubber so I found that the local rubber supplier sold this in a 2" version as well. 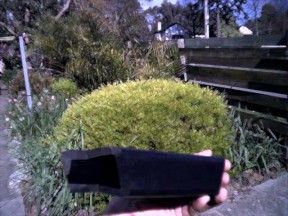 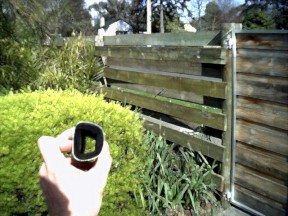 I bought a 4 meter length of the molding which gave me 1/2 a meter to play with to get the cuts right. Using a short piece I made a template for both door sill ends with a utility knife until it fitted perfectly. I also used an angle grinder to thin the ends so it would fit over the flares and smooth all the cuts. Next I wrapped some paper around the ends and cut around the shape so I would have a template to transfer it across to the full length. 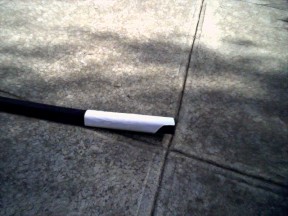 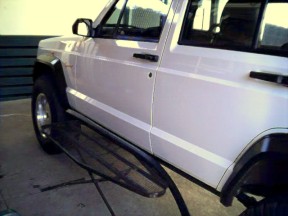 After wrapping the template around, it was just a matter of cutting and grinding to get the shape. I found using an ironing board made it easier to support the full length while getting the fit perfect because you could adjust it to the right height. It also came in handy while fitting it to the car. Once one end had been done I started on the other keeping in mind that I couldn't afford a mistake so the rear was done last as it was the easier end. For the other side of the car I turned the template inside out to get the mirror image. 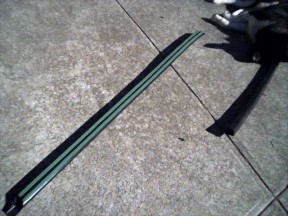 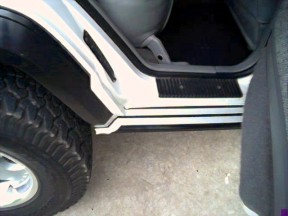 I bought double sided tape from the panel beater as it is different from the normal tape as it is waterproof and stronger. Between the tape I also put a bead of Wurth adhesive and sealer compound to increase the strength. This was put around the ends where the tape wasn't used and after fitting was supported with timber overnight until it had gone off. Masking tape was put either side of the joint and then filled with the same sealer ( which can also be sanded ), and then scrapped with a rubber squeegee dipped in methylated spirits to get a smooth level finish. 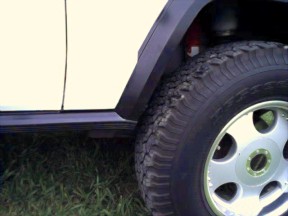 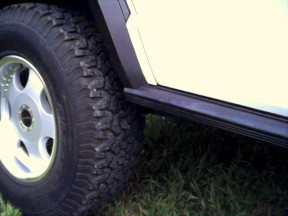 The tape is then pulled off leaving a nice straight edge and then rubbed over again when it has started to go off with a latex gloved finger dipped in methylated spirits to smooth the edges. It  will help stop any parking lot dents from careless others as well. I have now done a long off road trip with it and am very pleased that it has worked as intended and kept the stones off the sill and doors. 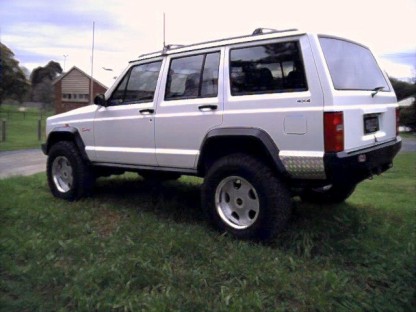