I wanted a dual battery setup to run my new 40 litre ARB fridge that I had just bought. The only thing was that I did not want to crowd my under hood area anymore as it restricts airflow ( less air will then be drawn through your radiator ) and it gets in the way to access things around it. Also a battery of this size weighs 22 kgs ( 48 lbs ) which is something I don't want to lug around the rest of the year when I don't need it. I looked into ready made ones like the Waeco range but they are very expensive and still don't have the reserve capacity or amp hours that I was after. Also they re-charge very slowly and you have to throw away the whole thing each time it needs replacing. So what I did is outlined below. 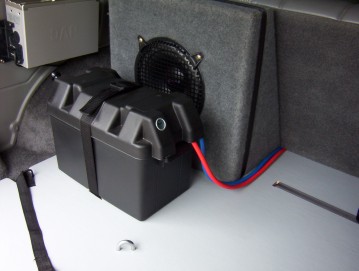 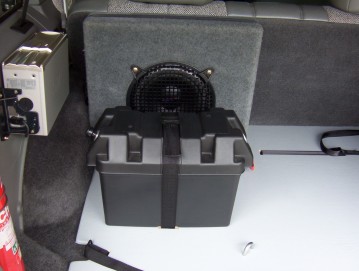 I bought a battery box from the local auto store and you can get them from boating places etc as well. They come in different sizes so first pick your battery! The battery you chose must be fully sealed!! This does not mean you have to use a dry cell or gel battery, but you can still use a lead acid one like mine so long as it a fully sealed maintenance free one ( not all maintenance free are fully sealed! ). It cannot vent at all as the gasses are dangerous and can ignite in a closed area. I bought a Yuasa Rocket ( SMF NX120-7L ) battery. It has a 730 CCA ( cold cranking amps )( 730 amps can be discharged at 0 degrees F (-17.8*C) for 30 seconds while maintaining the voltage above 7.2 volts ) with RC 160 ( reserve capacity )( can handle a 25 amp draw for 160 minutes before reaching 10.5 volts at 80*F ( 26.7*C ) and 90 AH ( amp hours )( Yuasa states this means it can handle a 9 amp drain for 10 hours before reaching 10.5 volts ( some companies rate it differently, see here ). I chose this one as it a bit of a hybrid battery as it in-between an all out starting battery or a deep cycle one ( sometimes called a dual marine ). So it can happy serve both functions. 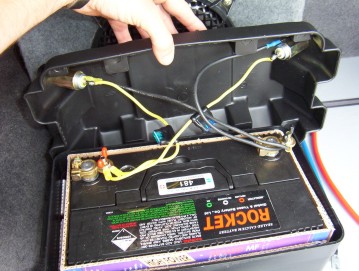 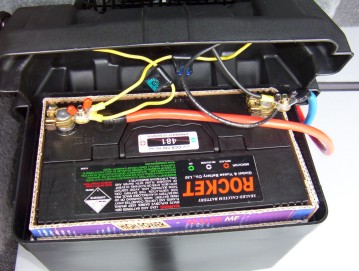 I added two cigarette sockets to the box to plug my fridge into as well and recharge my lantern. I fused them using an inline spade type fuses. The battery clamps have a stud with a wing nut to make it easy to remove my charge cables when I take the battery from the car. The wire gauge I used for the main cables were 2 gauge which is the recommended for 10 to 20 feet distance if you what to use it as a starting battery as well. 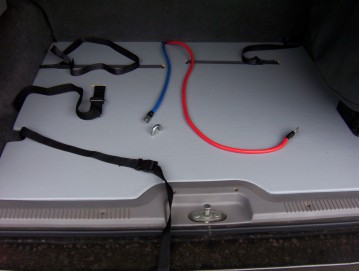 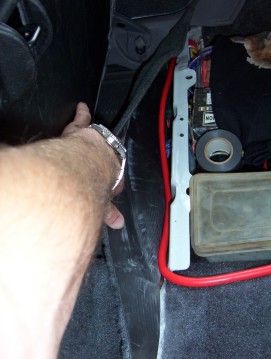 I cut some 6 ply board that I found and made it about 40 mm longer so it tucks under the rear seat keeping that end clamped down when the seat is in the upright position. The hold down strap passes through a slot cut into the board and under the board and back up through another slot on the other side of the battery. This is a far strong way than around brackets mounted into the board and the surface area is much higher than of a few screws! The board is covered it all in grey vinyl to make it easier to keep clean. The positive cable was run through the firewall in a grommet and under the lower door trim. It then runs between the carpet and the seat panel but made sure that I bent the end of that panel where the cable turns and runs under the seat as shown above. 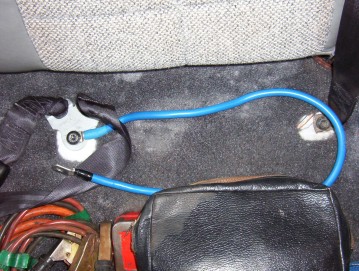 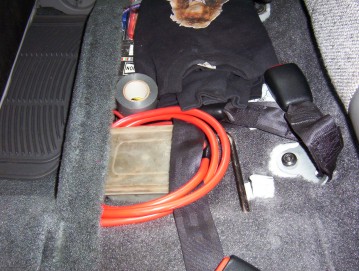 For the earth connection I used a seat belt anchor with a star washer to make sure there was a good connection. When the battery is not in place the cables are left under the seat. You must however cover the end of the positive cable or disconnect it from the isolator as it will be live once the main battery is fully charged while the car is running. It is not live at any other time.

The separator I used, to stop the main one from being drained while to engine is not running, is sold through ARB outlets here in Australia but being made in the USA it should be easy to get them there. It is made by Sure Power and you can see the details of it here http://www.surepower.com/Products/batsep.asp . Be aware there was a recall on some of these. It will also charge the auxiliary battery once the main one has reached above 13 volts making sure this way that the starting battery is always fully charged first. I placed it just behind the fuse box. A new 2 gauge cable was added ( no need to change the existing wiring at all ) between the standard battery and the separator. I also added another ground to the body as I chose to use the body as the ground supply for the negative terminal for the auxiliary battery and the stock battery to ground cable is not good enough. Then I used 2 gauge cable to run the positive all the way to the back of the car. The reason it is so thick is because of the distance it has to run as well as another feature of this separator. At start up it checks the voltage of both batteries and if the starting one is lower than the auxiliary it will couple both together to help start the car. If you don't want this feature you can just use 6 gauge wire and leave off adding one of the other wires explained later. The cheapest place to buy 2 gauge wire is from a welding supplier. 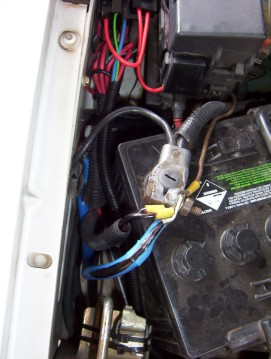 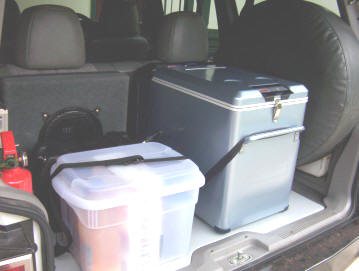 That's all the big cables done and now onto the 14 gauge stuff on the separator. One is just to ground which can be just one of the mounting screws and the other is to start only of the ignition. On my RHD  XJ I was able to pull one straight out of the harness that was under the separator. Just follow the small wire up from the starter solenoid and splice into that. If you want it to be a fully manual setup then you just connect this wire terminal to positive. You also can if you wish connect a light to let you know at any time when both batteries are being used together.

It has worked very well and I found that on hot summer nights ( 20 degrees C or  70 degrees F ) over a 12 hour stop it only dropped .4 of a volt which was the same as the main battery! On colder Autumn nights under 15*C or 60*F it would only drop .2 of a volt where the main battery still lost .4 of a volt over night. Remember you should not let it drop below 10.5 volts or permeant damage of the battery could result. Remember this is a guide to battery usage only as it depends on how often you open it and how long it is left open while doing so and which fridge you are using.